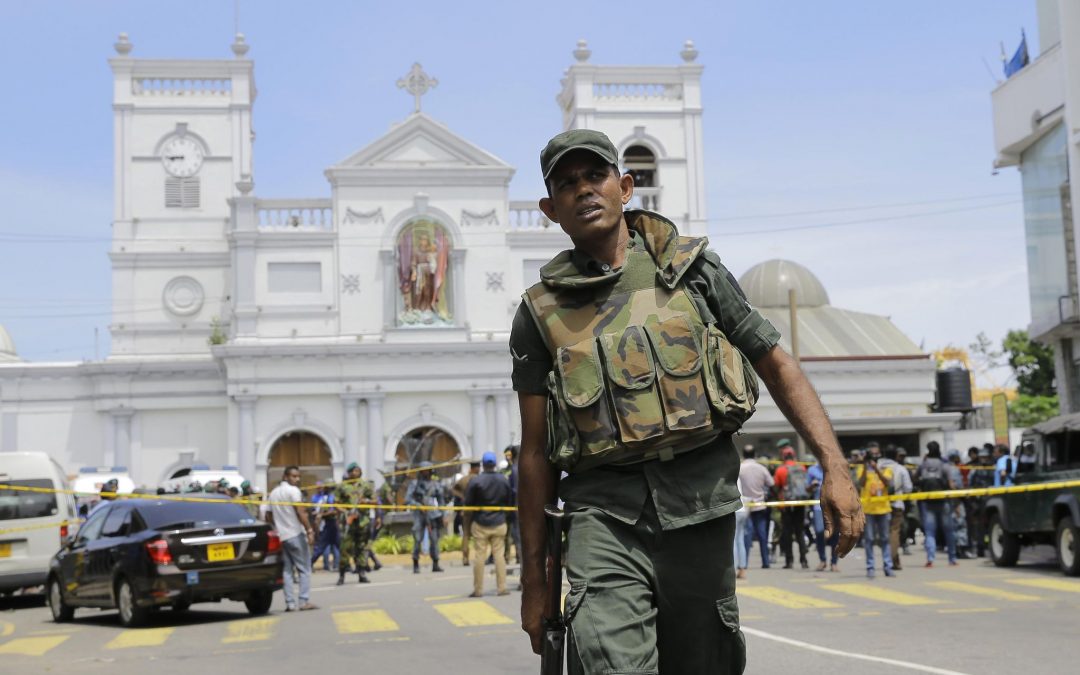 More than 290 are dead and 500 wounded in an Easter Sunday jihad massacre in Sri Lanka. The terrorists targeted three Catholic Churches and three luxury hotels frequented by foreigners. Government officials blame the attack on “religious extremists,” though no group has claimed responsibility.

The term “religious extremists” implies that the vast majority of Muslims would disapprove of what the extremists did. Yet, while the vast majority won’t resort to terror themselves, they highly honor those who do. Indeed, jihad martyrs are the most honored people in the Islamic world. In the West Bank, streets, squares, parks, and schools are named in honor of jihad martyrs. Like the terrorists in Sri Lanka, the Palestinian “martyrs” are responsible for the murders of innocent men, women, and children. Still, they are considered heroes.

A pro-Western physician in Gaza explains it this way:

Martyrs are at the level of prophets. They are untouchable. I can denounce suicide bombings, which I have many times, but not the martyrs themselves, because they are like saints… I don’t believe in religion myself, but I cannot say that martyrs are wrong. If you do that, you will discredit yourself completely.

Jihad martyrs (or “terrorists” as we call them) are extremists only in the sense that Catholic saints are “extreme.” In short, they are willing to go beyond the average in answering the call of duty. The difference lies in what that call of duty consists of. For Catholics, the last full measure of devotion is a willingness to give up your life for your faith. For Muslims, it is to “slay and be slain” for the cause of Allah (Koran 9: 111).

While Muslims believe it is wrong to take innocent life, those who reject Allah—who do not believe in him—are not considered to be innocent. Although Christians and Jews who live in Muslim-majority lands and accept dhimmi status are given protection from punishment for this crime (in theory, but not always in reality), non-Muslims who live in non-Muslim societies are not exempt.

Muslims who kill the kuffar (unbelievers) are not breaking any Islamic commandments. In fact, they are doing a service to Allah. Take Matin Azizi-Yarand, a young Muslim convert who planned to commit mass murder at a mall north of Dallas. In discussing his plans with an FBI undercover source, he said: “But I swear I want to achieve Allah’s pleasure and kill the kuffar.”

Neither Islam nor Christianity are moderate religions. Christ was not moderate, and he did not bring a message of moderation. The gospels are full of admonitions to take up the cross, to die with Christ, and to be buried with him. Most Christians, if they are honest with themselves, understand that much more is required of them than mere moderation.

The same holds true for Muslims. Even those Muslims who practice their faith in a moderate fashion know that more is expected of them. That is why jihad martyrs are highly honored and held up to youth as models to emulate. Some of this dissatisfaction with moderation is expressed in a blog kept by Terry Lee Loewen, a convert to Islam who planned a jihad attack on Wichita’s Mid-Continent Airport in 2013.  He wrote:

I don’t understand how you can read the Qur`an and the sunnah of the Prophet and not understand that jihad and the implementation of sharia is absolutely demanded of all the Muslim Ummah. I feel so guilt-ridden sometimes for knowing what’s required of me but yet doing little or nothing to make it happen.

Naïve Westerners, including naïve bishops and cardinals, often assume that terrorists, like the ones in Sri Lanka, have misunderstood their religion. They take it for granted that “true” Islam is a peaceful religion like Christianity. Consequently, they believe that the remedy for Islamic terror is more Islam. Pope Francis, for example, has encouraged Muslims to go deeper into their faith and to find guidance in the Koran.

But jihad martyrs have gone deeper into their religion and they have discovered that Muhammad was rather keen on jihad, and hard on slackers. Thus: “Fighting is obligatory for you, much as you dislike it” (2: 216); “If you do not go to war, He will punish you sternly and replace you with other men” (9: 39); and “God has exalted the men who fight with their goods and their persons above those who stay at home” (4: 95).

Jihadists are, on average, not less religious than their peers but more so. In fact, several studies have revealed that the more religious a Muslim becomes, the more likely it is that he will participate in violent jihad. Indeed, “increased religiosity” is one of the predictors of radicalization. Prior to their rampages, the Fort Hood shooter, the Boston Marathon bombers, and the Pulse nightclub killer all showed signs of increased devotion. Likewise, Salman Abedi, the Manchester suicide bomber, was seen “chanting Islamic prayers loudly in the street” in the weeks before he massacred twenty-two young people at an Ariana Grande concert.

As I said before, neither Christianity nor Islam is a moderate religion. Both are demanding of believers. But there are differences. Catholics don’t worry that a young man who starts praying the rosary and attending Mass daily might soon be building bombs in his basement. Conversely, a Christian who practices his faith in moderation or who makes only a moderate effort to obey the Ten Commandments is not generally considered by fellow Christians to be a good Christian. Indeed, one never hears the term “moderate Christian.”

Yet, the same Christians who look askance at the slacker Christian think of the moderate Muslim as the good Muslim—a model representative of his faith. But, as I noted earlier, Muslims themselves don’t praise moderate Muslims; they honor those that we consider extremists. Conversely, they sometimes show very little sympathy for the victims of jihad. For example, while playing in Australia, the Saudi soccer team refused to observe a minute of silence for victims of the London Bridge terror attack. To do so, a sheik later explained, would be to show disrespect for “their Muslim brothers who fought for jihad and fought [against] the infidels.” Likewise, the Council of Belgian Imams rejected an initiative to pray for the souls of the victims of the Brussels terror attack on the grounds that it is against Islamic law to pray for non-Muslims. Why is that? Possibly because all non-Muslims are presumed to go to hell after death, and to pray for them might show disrespect to Allah.

Which brings us back to the events in Sri Lanka. Christians find it difficult to fathom a God who would approve of the Easter Sunday massacre. Yet the Allah who is depicted in the Koran shows extreme dislike—even contempt—for unbelievers. Moreover, he seems to delight in the sufferings they experience in hell. So, from the point of view of a devout Muslim, one who dispatches the unbeliever can be regarded as performing a great service to Allah.

As strange as it seems, the Sri Lankan jihadists may well have believed that they were offering worship to God. On the morning of the attacks, Mohamed Azzam Mohamed, one of the terrorists, queued up for the breakfast buffet at the Cinnamon Grand Hotel in Colombo. He was just about to be served when he set off the explosives strapped to his back in the restaurant which was packed with families. Was Azzam a good man? Whatever Westerners may think, he was—from the perspective of many Muslims—a good Muslim. It’s quite likely that he will one day be honored as a martyr residing in paradise.

Is there any solution to the problem of jihad terror? One possible way to undercut the jihadist’s motivation is to convince moderate Muslims—especially religious leaders—to declare that Mohamed Azzam Mohamed is in hell, along with other jihadists who have innocent blood on their hands. But that is unlikely to happen. Although they may be personally averse to violence, many “moderate” Muslims believe as he does about the essentials of their faith.

This article originally appeared in the April 23, 2019 edition of Crisis.