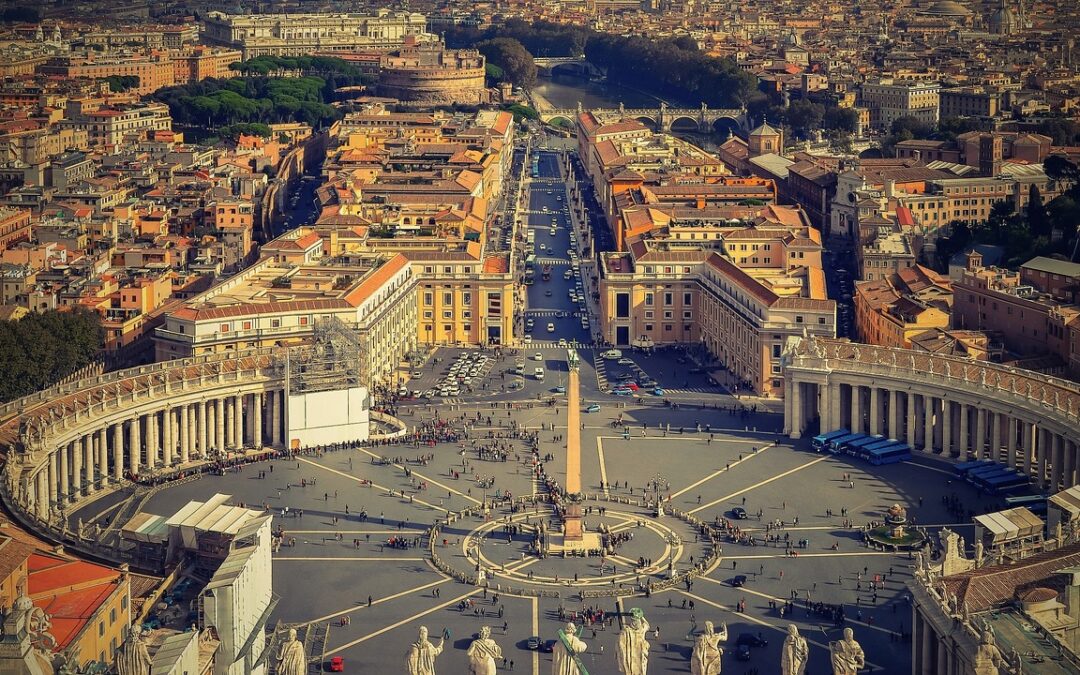 Irish of a traditional bent need not apply.

Most practicing Catholics will have noticed by now that the Church under Francis has changed.  And many are not happy with the changes.

For example, Andrea Cionci, author of a new book which questions the validity of Francis’s election, says that Francis’s objective is to “demolish Catholicism.” But it’s not only Francis that traditional Catholics worry about. His plans for the dismantling of the Church are being implemented by a small army of prelates who are, in essence, Francis clones.

Right now, Francis and his supporters are utilizing the Synod on Synodality as the main engine for transforming the Church into something new and strange. Conservative critics of the synod claim that it is a “hostile takeover of the Church,” an “exercise in self-destructive behavior,” and an “open revolution.” This may seem extreme, but many of Francis’s words and actions reveal a man who is deeply hostile to the Catholic Church—a Church which he considers “rigid,” “fundamentalist,” “exclusivist,” and very much in need of opening-up. Moreover, those who are running the Synod share his sentiments.

In reality, the Church has been opening-up ever since the pontificate of John XXIII, but much of what the Church of Francis is engaged in is not simply an opening-up of the Church, but a rejection of it.  Church leaders are already in the process of rejecting the Church’s teaching on marriage, adultery, abortion, homosexuality, gender, divorce, polygamy, clerical celibacy, and women’s ordination. To the extent that they are opening the Church, they are opening it to people who dissent from Church teaching on these and other matters.

Perhaps because they realize they are already firmly in control, the “woke” prelates have become quite open about what they plan to do.  For example, the Vatican has just released a new document for the Synod on Synodality which calls for “a Church capable of radical inclusion.”

The 44-page document is entitled “Enlarge the space of your tent,” but the tent doesn’t seem to have much space for traditional Catholic beliefs and practices.  Rather it encourages dialogue with “those who, for various reasons, feel a tension between belonging to the Church and their own loving relationship, such as remarried divorcees, single parents, people living in a polygamous marriage, LGBTQ people, etc.”

“Polygamous marriage?”  One wonders what’s included in “etc.”  In any event, this new inclusive model is being suggested as the model the Church should embrace.  But don’t assume that the plan is to help the “marginalized” (i.e., adulterers, LGBTQ etc.) to conform their lives to Church teaching.  Rather, the plan is to conform the Church’s teachings to the “lived experience” of the marginalized.

“Radical inclusion” sounds vaguely Christian, but it is actually a plan for demolishing the Church—as the word “radical” implies. The word brings to mind images of the radical French Revolution, the radical Russian Revolution, and the radical Sexual Revolution. All three resulted in enormous damage to the societies involved, yet the Synod documents often speak the language of revolutionary change. Moreover, the Synod fathers seem anxious to bless the Sexual Revolution and bring it fully into the Church. “Radical” is not usually thought of as a term of praise, but that’s the way it was used by Cardinal Jean-Claude Hollerich, the Relator General of the Synod, in a recent interview with L’Osservatore Romano. Hollerich praised Pope Francis for being “not a liberal” but a “radical.”

Most Catholics don’t keep up with recent issues of L’Osservatore Romano or with the latest Vatican document. So, relatively few are aware of the radical nature of the changes being proposed in the synods. Perhaps the most prominent synodal theme is “inclusion,” and the promise that no one is excluded. But when the Synod fathers say “no one is excluded,” it should give us pause.  Do they also mean “no sins are excluded?”  Do they mean that no repentance is required? The numerous synod documents suggest that what progressive Catholics want is an inclusive community without rules—a place where each follows his or her own inner guidance.

But workable communities that last do have rules and, in order to survive, they tend to exclude those who won’t follow the rules.  One supposes, for example, that a good number of bishops belong to a golf club.  And it’s a good bet they know and observe the rules of the club.  If a bishop drives his golf cart in a reckless way after several drinks and several warnings, he can expect to be excluded from the club.  He can claim that the club has “marginalized” him, but in reality, he has marginalized himself.

One might counter by observing that the Church is not a golf club. It follows a different—more merciful– set of rules. Cardinal Hollerich has said as much: “[The] Kingdom of God is not an exclusive club.” Rather, he says, its doors are open “to everyone without discrimination.” “This,” said Hollerich, “is simply about affirming that Christ’s message is for everyone.”

All Christians can agree that Christ’s message is for everyone. But most would want “everyone” to hear the full message of Christ, not a highly redacted version. If you read the full message of Christ on the subject of entrance into the Kingdom of God, you would not, contra Hollerich, get the impression that it’s open “to everyone without discrimination.” Not by a longshot.

Take Matthew 25:31-46—the parable about the sheep and the goats. On Judgment Day, “[The King] will separate the sheep from the goats, and he will place the sheep at his right hand, but the goats at the left.” He then invites the sheep to inherit the kingdom, but the goats are sent away “into eternal punishment.”

I don’t know about you, but that sounds discriminatory to me. And frightening as well. Thank Heaven for purgatory.

Christ also discriminates on several occasions in favor of wheat over weeds (or chaff): “Let both grow together until the harvest and at harvest time I will tell the reapers, ‘Gather the weeds first and bind them in bundles to be burned, but gather the wheat into my barn’” (Mt.13:30).

In another parable he tells his disciples: “The Kingdom of Heaven is like a net which was thrown into the sea and gathered fish of every kind; when it was full, men…sorted the good into vessels but threw away the bad” (Mt. 13:47-48).

Lest there be any misunderstanding, Jesus then explains: “So it will be at the end of the age, the angels will come out and separate the evil from the righteous, and throw them into the furnace of fire” (Mt. 13 49-50).

In another parable about a wedding feast, a guest without a wedding garment is cast out the door: “Then the king said to the attendants, “Bind him hand and foot and cast him into the outer darkness…For many are called, but few are chosen” (Mt. 22: 13-14).

Hollerich may say that the Kingdom of God is open “to everyone without discrimination,” but the Gospels seem to be saying something different.  Hollerich says, in effect, “come as you are,” but Jesus advises us to come wearing a wedding suit (i.e., in a state of grace.) Although well-acquainted with the merciful sayings of Jesus, Hollerich and Francis seem to ignore his more judgmental warnings.

Quite obviously, the words of Jesus are an obstacle to the synodal plans of Hollerich, Francis, and others in the hierarchy.  Quite obviously, Jesus will have to go if the synodalists hope to achieve their goals.  Expect him to gradually disappear from the new radically inclusive Church.  Either that, or expect him to be transformed to better fit the jolly theology of Cardinal Hollerich who tells us that “living in the footsteps of Christ means living well, it means enjoying life.”

In short, expect Jesus to be transformed into some kind of happy genderless hippie who utters woke platitudes and announces the good news that your sins aren’t really sins at all.  He just wants you to be happy doing whatever makes you feel good.

It is, of course, a formula for disaster. Canon Lawyer Rev. Gerald F. Murray calls it “a self-destructive Synod.”  He notes some of the signs of decline in the Church we have already seen under Francis: “lack of priestly vocations in the developed world; the steep decline in Mass attendance, baptisms, and Church weddings…the collapse of religious orders and the rejection of doctrinal fidelity.”

One doesn’t have to look far to find signs of doctrinal infidelity.  Here in the U.S., LGBTQ-activist priest Fr. James Martin has asserted that LGBT Christians are not bound by the rule of chastity.  And in formerly Catholic Ireland, an elderly priest was recently suspended by his bishop for speaking of the sinfulness of certain sexual activities.

The priest, Fr. Sean Sheehy, said he was simply stating what was in the Gospel. But that’s the problem, isn’t it?  Fr. Murray says the Synod is “self-destructive.”  But it’s only self-destructive if the intention of the Synod is to preserve and strengthen the Church founded by Christ and revealed to Christians in the gospels.  If the intention of the Synod fathers (along with Pope Francis) is to replace the Church of Christ with a humanistic/modernist Church with all the supernatural elements purged out, then the Synod has thus far been a roaring success for them—if not for the rest of us.

It’s possible that the Synod organizers are genuinely well-intentioned.  Perhaps they think that by downplaying immorality and by convincing Catholics to “take it easy on yourself,” Catholics will shake-off their burden of guilt and lead happier, healthier lives.  But previous attempts at relaxing the rules while ignoring the supernatural dimension of life—such as the Sexual Revolution—eventually resulted in making life harder not easier.

Should the Synod fathers succeed in convincing Catholics that sin is not sinful, the destructive, addictive, and family-wrecking effects of sin will still be at work—both in individual lives and throughout society. The Synod leaders may succeed in bringing about radical change in the Church, but because of their naivete about human nature, the changes will inexorably lead to widespread unhappiness and despair.

This article originally appeared in the November 9, 2022 edition of Front Page.