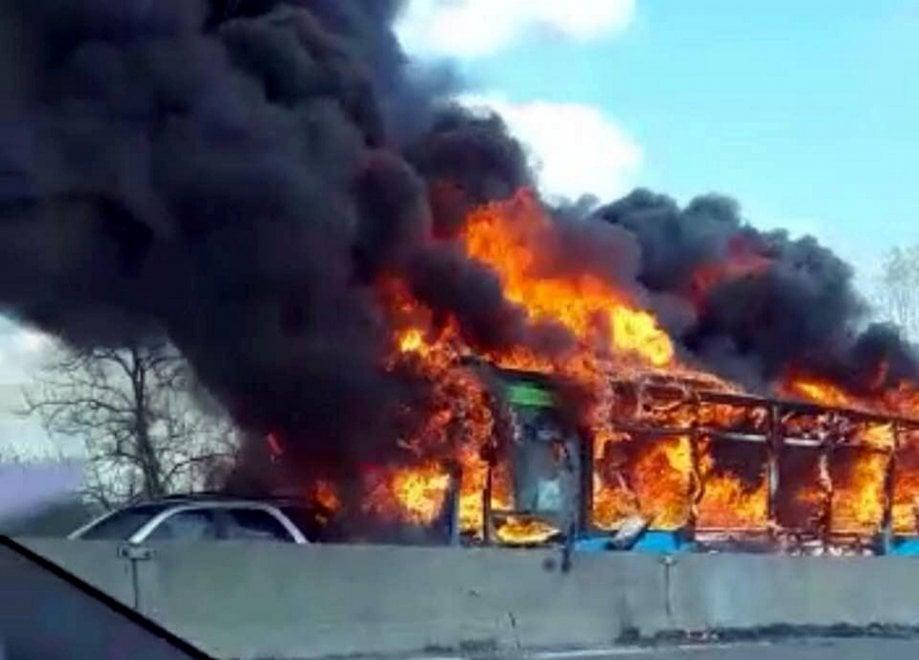 I see that Ousseynou Sy’s sentence for attempted murder has just been reduced to 19 years on appeal.

Ousseynou Sy? Perhaps the name doesn’t ring a bell. He’s the bus driver who set his bus full of children on fire two years ago. It happened on a highway near Milan, Italy. Sy hijacked his school bus filled with 51 middle school children, forced three chaperones on board to handcuff the children with plastic ties, then led police on a high-speed chase which ended at a police barricade. Then, Sy torched the bus which he had previously doused with fuel. Fortunately, police were able to break the bus windows and free the children, but not before a dozen of them suffered bruises and smoke inhalation.

Still don’t remember? Well, don’t blame yourself. After it was revealed that the driver was a Muslim migrant from Senegal, the story was promptly killed in the U.S. before it could gain any traction. You can read about the non-coverage of the story here.

Strange.  As I wrote at the time:

It’s a great big look-at-me story full of drama and human interest. Most parents, especially those with school-aged children who take buses to school would want to know about a story like this. Grandparents would also want to know. Wouldn’t you? Don’t the people at Google News have children? Don’t they care?

In normal times, this is the kind of story that the media loves to cover: high speed chase, burning bus, brave students (two of the bravest were North African migrants), heroic police, tearful children rushing into the arms of worried parents, and a happy ending for all—except, of course, for Mr. Sy. Why weren’t all the Jimmy Olsen’s of the world digging into this big story that could possibly make their careers?

Well, the truth is they were all busy covering what—from a politically correct perspective—was a much bigger story. Five days before the bus hijacking incident, a white nationalist had entered two mosques in Christchurch, New Zealand, and massacred 50 Muslims at worship. The story fit the prevalent media narrative to a “T”—namely, that Muslims are victims of widespread Islamophobia and that white supremacism is the root of all evil. Consequently, the Christchurch story remained at or near the top of the news for months. Google News, which contained no headline stories about the bus hijacking, ran dozens of stories about the Christchurch massacre on March 20th (the day of the hijacking) and continued to cover the New Zealand tragedy for months afterward—all the while giving the silent treatment to the Italian story.

It was bad timing for Ousseynou Sy. Not only was he unsuccessful at hijacking and mass murder, he chose the worst possible time to send his message (he said his motive was to avenge Africans who had died in the Mediterranean due to Italy’s anti-immigrant policy).

But even if Sy had chosen a more propitious time for his deed, the story would have received short shrift. It would have been covered for a few days and then quickly consigned to the memory hole.

How do I know? Because that’s been the pattern now for well over a decade. Stories about Muslims committing violence don’t fit the media narrative which tells us that Islam is a religion of peace. And such stories don’t fit the narrative that Muslims are always victims. Moreover, media reports of jihad attacks, which are unmistakably committed in the name of Allah, always contrive to make the case that the attack had nothing to do with Islam. Then, once the pre-scripted points have been made, the story is hastily dropped—rarely, if ever, to be revisited.

The most recent example of this see-no-Islam strategy is the reporting on the Boulder, Colorado, massacre. On March 22, a young Muslim entered the King Soopers Market in Boulder and killed 10 people with a semi-automatic pistol. But by March 27, stories about the shocking event were few and far between. The story is probably already fading from your memory, and it’s a good bet that many Americans never heard about it in the first place.

Initially, it was thought that the shooter might be a white supremacist. But then it turned out that he was a Muslim with radical sympathies who had blamed the Christchurch massacre on Islamophobia and who thought of himself as a victim of Islamophobia.

After that revelation, the story was quickly dropped. I predicted that it would be, but, ironically, the Boulder incident was effectively buried before my prediction was published. My expectation that the story would soon disappear was contained in a piece I had written a few days after the massacre. But, for a number of reasons, publication was delayed, and by the time my forecast reached print, it was already old news.

The press lost no time in killing the story of the killings—just as it has done in dozens of previous Islamic jihad attacks. The European and world press do the same thing. So, chances are you haven’t heard anything about the vast majority of jihad attacks. Approximately 4,000 Christians were killed for their faith last year by Muslims, but outside of Africa and the Middle East, few Christians are aware of these ongoing attacks.

It’s not only the news media that’s guilty of suppressing the truth about Islamic-inspired violence. Other media follow suit. Hollywood, for example, has produced very few films about Islamic terrorism, and, when it does adapt a book about same for the screen, the Islamic terrorists are usually transformed into neo-Nazis or Ukrainian mafia.

If it hasn’t already, the school bus hijacking story could be made into a first-rate film. It has all the elements of high drama. And it would only need one slight alteration. Instead of a Muslim migrant from Senegal bent on revenge, why not make the bus driver a Trump-supporting Christian white supremacist? That would keep the censors away, and, besides, no one would notice.

This article originally appeared in the April 23, 2021 edition of Crisis.