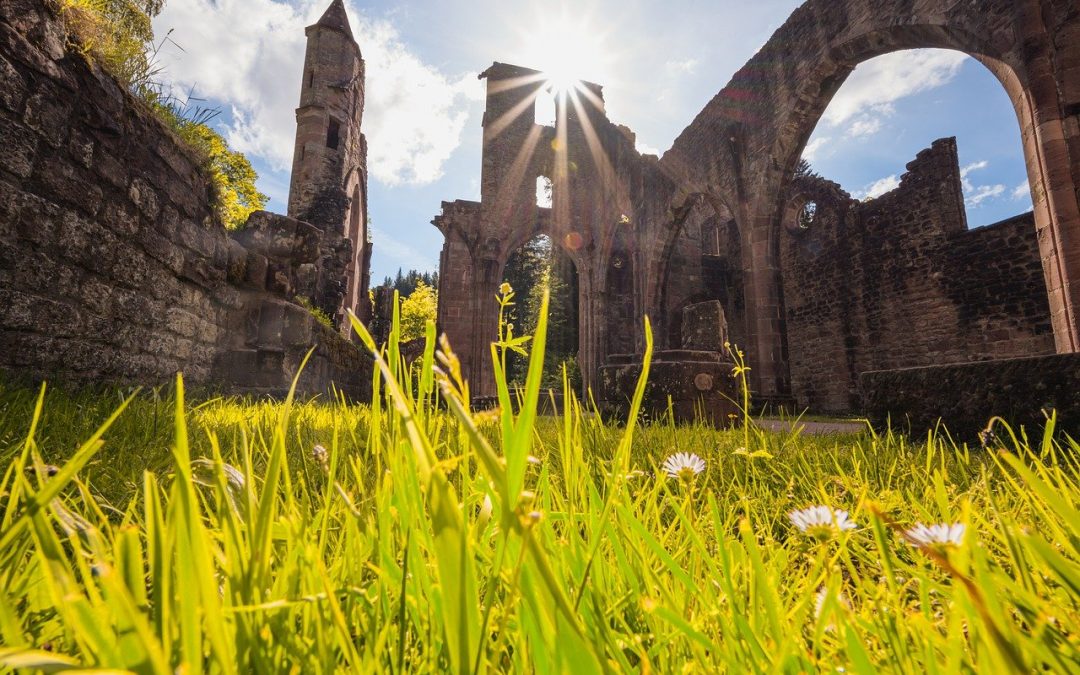 The watered-down religion of human fraternity which some Catholics hope to bring about will be no match for either militant secularism or militant Islam.

Jesus assured us that the gates of hell will not prevail against his Church. But we’re not told how much damage will be done to the Church in the meantime. So much damage has been done in recent years that, from a purely worldly perspective, it sometimes looks as if Christianity is on the path to extinction.

Polls in the U.S. and in Europe reveal that fewer people identify as Christians with each passing year, while a growing number—the “nones”—don’t identify with any religion. That trend seems likely to continue.

One reason is that advances in technology, medicine, and science have created the illusion that our needs can be met on a purely secular level. The gospel of wealth and health and positive thinking that was popular with many Protestant Christians in the first half of the twentieth century has been revived—only this time without the Gospel. You can easily find it on the internet: “8 Life lessons everyone should learn before 2020”, “Neuroscience says listening to this song reduces anxiety by up to 65%”, and “5 ways to reduce your risk of developing dementia according to new research”. And this is only a very small sampling of the myriad ways you can improve your life and boost your self-esteem without recourse to religion.

Thus, the Internet with its many answers to life’s problems, can, for some, become a substitute for religion. And for most of the rest of us, it serves to distract our attention away from the deeper questions about the purpose of our life.

But the decline of Christianity is caused not just by the many distractions of modern life, but also by direct attacks against it. And these seem to be escalating. The three main assaults against Christianity come from secularism, Islam, and, ironically, from within Christianity itself.

Most Christians who pay attention are aware of the first threat. Committed secularists maintain that Christians are free to believe whatever they want just as long as they don’t bring their beliefs into the public realm. Thus, you are free to believe that marriage should only be between a man and a woman, but if you’re a baker, a florist, or a wedding photographer, you must lay your beliefs aside for the sake of “community standards”—that is, for the standards of the ideological left.

It’s becoming apparent, however, that secularists won’t be satisfied merely with policing the public sphere. It’s not unreasonable to conclude the day is approaching when the reading of an epistle at Mass will be a hate crime, priests will be forced to perform same-sex “weddings”, and it will be compulsory for Catholic schools to teach the joy of LGBT sex.

Even if militant secularists could be stopped from breaking down the doors of Catholic churches and schools, they have already managed to undermine Christianity in significant ways. One of the most effective ways is to consign Christian teachings to the realm of the unfashionable, or worse. How is this accomplished? It’s simple enough. When the fashionable people who control advertising, the entertainment industry, the NFL, and the public schools say that trans and gay are A-OK, any individual or institution who says otherwise is, almost by definition, unfashionable. And that’s all that those who aspire to “woke” status need to know about Christianity.

The second major attack on Christianity comes from Islam. In places where Muslims are a distinct minority, the attack often comes in the form of demands for equal treatment which soon become demands for special rights. In Europe, Muslims present themselves as the “new Jews”—victims of racism and discrimination who deserve special treatment to compensate for their sufferings. In liberal, secular Europe this ploy is quite effective. Thus, the European Court of Human Rights has ruled that criticism of Islam is a crime. And in England, police arrest Christian street preachers for fear that the Christian message will offend Muslims.

In parts of Asia, Africa, and the Middle East, Christians come in for much harsher treatment. They face daily persecution and even genocide. But relatively few Christians in the West are aware of the extent of the Islamic assault on Christianity, either in Europe or in the developing world.

Why? Because the same fashionable people who think its fine to bring drag queens into your public library act like Victorian-era prudes when it comes to Islam. Persecution of Christians at the hands of Muslims? You should be ashamed of yourself for even broaching such a delicate topic. Polite people don’t talk about such things. Indeed, the fashionable people who feel that they have a perfect right to teach your children that gay is okay, also believe that they have a God-given (excuse the language) mandate to teach them that Islam is a religion of peace and justice—unlike that other religion that supposedly introduced slavery, sexism, and homophobia to the world.

The frequency and intensity of Muslim attacks on Christians is magnified by the media’s silence. Reporters and journalists who raise an outcry whenever other groups are persecuted, are stricken with laryngitis when Christians are the target. When elephants are hunted in Africa, reporters jump to their defense, but when it’s Christians who are in danger, all they can muster is a shrug of the shoulder.

The tacit and sometimes not-so-tacit alliance between secularists and Islamists means that Christians are up against a combination of formidable foes. What makes the situation worse is that the Church is also under attack from powerful people within its own ranks.

These Churchmen seem intent on transforming the Church from a God-centered institution to a man-centered organization. Their goal is not to seek the Kingdom of Heaven, but to create a humanitarian and egalitarian community here on earth—possibly in partnership with the United Nations.

However, in the process of making the Church more acceptable to the world, they have weakened the Church in the eyes of the world. When the Church claimed to be the One True Church, she commanded more respect (though sometimes grudgingly) from the world. Now that leading Churchmen make no claim to exclusivity, the Church commands much less respect.

Of course, this loss of respect is compounded by the recent revelations of corruption in the Church—sexual and financial corruption and everything in between. It may well be that this corruption is the direct result of exchanging the goal of sanctification for more humanistic goals. In any event, it seems fair to say that the Church in recent years has lost both respect and credibility, and has even become something of a laughing stock—an old boys club where the old boys act like frat boys. The world, however, seems willing to overlook these “foibles” because the “new Church” has proven useful to progressive causes.

Some in the Church have proven useful to the Muslim world as well. That’s because various churchmen have become apologists for, and enablers of, Islam. Many Church leaders long ago joined the chorus of world leaders who—with hardly a shred of evidence—claimed that Islam is a religion of peace—a tranquil faith that has nothing to do with terror.

Not only were church leaders willing to whitewash Islamic history and doctrine, they were, in large part, willing to overlook the Muslim slaughter of Christians in the developing world.

When Benedict XVI had the temerity to decry the bombing of Christian churches in Egypt, the Grand Imam of Al-Azhar broke off the university’s dialogue with the Vatican, and only agreed to reopen it if Pope Francis promised not to cross the “red line”—namely, criticism of Islam.

Francis gladly agreed, presumably on the assumption that terrorists are misunderstanders of “true” Islam. As he stated in Evangelii Gaudium: “Authentic Islam and a proper reading of the Koran are opposed to every form of violence.”

It appears that Francis and his circle not only think that Catholicism can be turned into a sort of humanistic religion, they apparently think the same of Islam. The “Document on Human Fraternity for World Peace and Living Together” which was signed jointly by Francis and the Grand Imam is full of humanistic nostrums, and it seems to assume that the coming one-world religion is only a step away.

Of course, if Francis’s assessment of Islam as a nascent humanistic religion is correct, then there is reason to hope for a more peaceful world. But if he is wrong—if, as President Erdogan of Turkey has said, “Islam is Islam, and that’s that”—then the newly humanized Church has put itself in a very bad position vis-à-vis both Islam and secularism.

In times past, the Catholic Church was a rallying point against both the aggressiveness of Islam and the excesses of secularism. In its present weakened state, however, it is hard to imagine it as a rallying point for anything other than LGBT initiatives and socialist schemes. Like Francis, secularists long for a one-world government, but it takes a special kind of naiveté to believe that the one they envision will be hospitable to Catholics and other Christians. Like Francis, Muslims, too, yearn for a one-world religion, but the one world religion they have in mind is Islam—not a syncretic blend of spiritualities.

The watered-down religion of human fraternity which some Catholics hope to bring about will be no match for either militant secularism or militant Islam. And it will certainly be no match for a simultaneous assault from both forces.

From a worldly perspective, the odds for the survival of Christianity do not look good. On the other hand, we have Christ’s promise that the Church will emerge victorious. And that changes the odds considerably.

This article originally appeared in the January 5, 2020 edition of Catholic World Report under the title “The Triple Threat to Christians and the Church.”

Pictured above: Ruins of All Saints Monastery, Black Forest