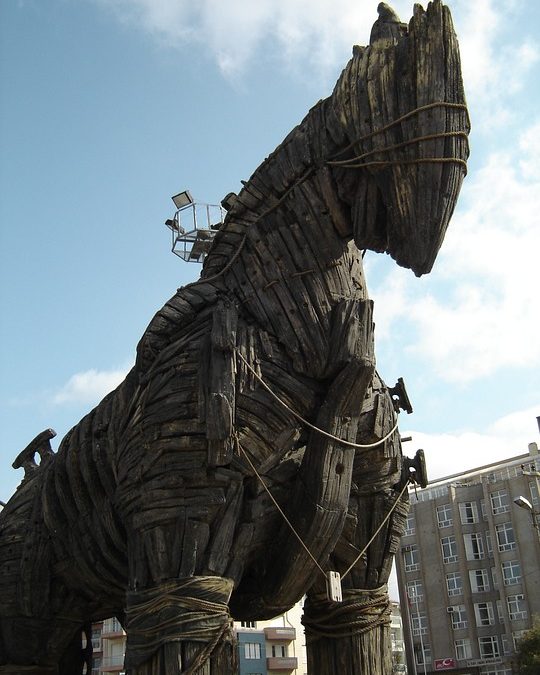 “Active shooter at Naval Air Station in Corpus Christi.” That was the breaking news story on Thursday morning. It turned out that the shooter was no longer active, having been “neutralized” after wounding a member of the base security force.

As it happens, I was in the middle of writing a piece—the article you are now reading—about Islam’s Trojan horse–like infiltration of Western society. Was the Corpus Christi incident a case of that? So far, we know that the shooter, Adam Alsahli, had expressed support for terrorists online, and that he was born in Syria and seems to have attended a university in Saudi Arabia. At some point he must have migrated to the U.S.  So, at the least, he seems to be guilty of migration infiltration—a subject that is discussed at length in Solomon and Maqdisi’s Modern Day Trojan Horse: The Islamic Doctrine of Immigration. To date, the details about Alsahli are sketchy, and as the authorities are always reminding us, we should not jump to conclusions. As is quite obvious by now, however, the problem is not that the authorities jump to conclusions, but that they never come to any.

What follows are some examples of infiltration—some minor and some major. The most recent example I came across was this headline: “Utah:  Imam on terror watch list delivers opening prayer at state senate session.” How did the radical imam get past the gatekeepers? The answer is that the Islamic Trojan horse outside your gate always comes with a note attached: “It would be Islamophobic to look inside.” Most of us don’t even have to read the message. We have internalized it.

The story of the Utah imam reminded me that, years ago, when he was hailed as a model Muslim, Anwar al-Awlaki had been invited to lead prayers inside the U.S. House of Representatives. Al-Awlaki was later to become al-Qaeda’s chief propaganda officer, but at the time he had already been a mentor to several terrorists including three of the 9/11 hijackers.

This reminded me that al-Awlaki had also been a mentor of Nidal Hasan, the Army Major and “Soldier of Allah” who murdered 14 people at Fort Hood, Texas, in 2009.  And that reminded me that just last December, another Soldier of Allah, Mohammed Alshamrani, a Saudi Arabian officer, killed three naval personnel and injured eight others at the Pensacola Naval Air Station.  It was recently revealed that Alshamrani had been radicalized five years ago.  How come the government didn’t vet officer Alshamrani more carefully?  The short answer is that it would have been “Islamophobic” to look too closely into his past. Fear of being thought Islamophobic was also the reason that Major Hasan’s fellow officers never reported him even though they considered him to be a “ticking time bomb.”

The fact is, the Islamic Trojan horse has been inside the gates for a very long time, not only in the U.S. but also in Europe.  Indeed, a plot to Islamize the school system in Birmingham, England, several years ago was code-named ”Operation Trojan Horse.” Not very subtle, but why bother with subtlety when you’re dealing with people who are far more worried about Islamophobia than Islamic infiltration?

Educators are not, on the whole, a subtle lot.  They have trouble making fine distinctions, and prefer instead to deal in large and shiny generalities—diversity, gender, race, and so on.  That’s why it was so easy to pull the wool over the eyes of school administrators in Birmingham.  And that’s why the Muslim Brotherhood’s initial infiltration of the U.S. was accomplished through a university student organization—the Muslim Student Association.  The MSA’s membership has included such illustrious figures as al-Awlaki (who was president of the MSA at Colorado State University), Huma Abedin (who was an advisor to and close confidant of Secretary of State Hillary Clinton), and Mohammed Morsi (the Muslim Brotherhood leader who just happened  to come to power in Egypt while Clinton was at State).

You would think that some sharp-eyed professors might have become suspicious about the aims and purposes of the MSA, but their sharp eyes were apparently distracted by all the Arab money that was rolling into university coffers and paying for their research and sabbaticals.  According to the Clarion Project report on “Foreign Influences Ops on U.S. Universities,” since 2012 Qatar has donated $376 million to Carnegie Mellon University, $351 million to Georgetown, $340 million to Northwestern, $275 million to Texas A&M, $41 million to Virginia Commonwealth University, and smaller amounts to two dozen other institutions.  At the same time, Saudi Arabia has been pouring millions into Harvard and other “needy” universities.

In short, many professors of history, Middle East Studies, and Islamic Studies may have a financial interest in presenting pleasant narratives about Islam to their students.  Whatever the reason, universities have become mighty friendly toward Islam and might unfriendly toward its critics.

Take the case of Nicholas Damask, a professor at Scottsdale Community College in Arizona.  A Muslim student was offended by a quiz about Islam given in Damask’s World Politics course.  Pretty soon an online campaign against Professor Damask was mounted by offended Muslim students.  Because the campaign included numerous death threats, the professor and his family went into hiding.

Instead of coming to his defense, the college president responded by condemning Damask’s course, and demanding that he apologize to the student community. “We all benefit,” said President Haines, “by embracing a diversity of voices, viewpoints, and experiences.” “Diversity,” of course, no longer includes academics like Professor Damask who have non-conforming views about Islam.  They represent the wrong kind of diversity, and hence they are a vanishing breed on campus.

Islam’s Trojan horse operation on American schools also extends to the secondary and elementary level.  In 2008, the American Textbook Council examined the treatment of Islam in ten widely adopted junior and senior high school history textbooks.  The study found many serious omissions and misrepresentations as well as a “reverential treatment of Islamic history.”  This pro-Islam bias, suggests the author of the study, may result from the fact that social studies textbook editors “make a business of appeasing pressure groups.”

Islamic activist pressure groups can be high pressure indeed. After all, in 2011 Islamic activist groups pressured the FBI, the Pentagon, Homeland Security, and about a dozen other security agencies to rewrite their training manuals to remove anything that the activists considered offensive to Islam—which, in effect, meant any reference to Islam.

Although such external pressures can be very effective, internal pressures can be even more so.  These are the pressures that come from living in a politically correct culture where we are constantly told that we need to make amends to all the victims of our racist, sexist, and xenophobic society. Many of the highly placed people who make concessions to Islam do so not because of the intimidation factor, but because they want to demonstrate their tolerance.

The habit of virtue-signaling explains a lot about the Islamic penetration of our institutions.  Why else would so many politicians have endorsed the building of a mega-mosque near Ground-Zero in Manhattan except that they wanted to broadcast their tolerance?  Why else would Abduraham Alamoudi, who is now in prison for financing Al Qaeda, have been appointed as the Islamic Advisor to President Clinton, and “Goodwill Ambassador” for the State Department?  Why else would Mustafa Javed Ali, who previously worked for Muslim Brotherhood–linked CAIR, have been appointed as Senior Director of Counter-Terrorism for the National Security Council in the early days of the Trump administration?

And why, to get back to recent events, would Mohammed Alshamrani, a Saudi officer about whom very little was known, get approved to train at Pensacola Naval Air Station?  Along the line, there must have been a number of senior officers who signed off on Alshamrani, thinking, “If I don’t sign, there’s going to be a big fuss about Islamophobia.”

And so it is that the Islamic Trojan horse is not only within the gates of our society, but firmly embedded in some of the most sensitive and important institutions in our nation. As a youngster, I used to wonder how the Trojans were so easily fooled. But in light of all the foolishness displayed by our own politically correct gatekeepers, it seems that the type of  naïveté exhibited by the guardians of Troy is a perennial problem.

This article originally appeared in the May 29, 2020 edition of Crisis.