Islamization in the Schools 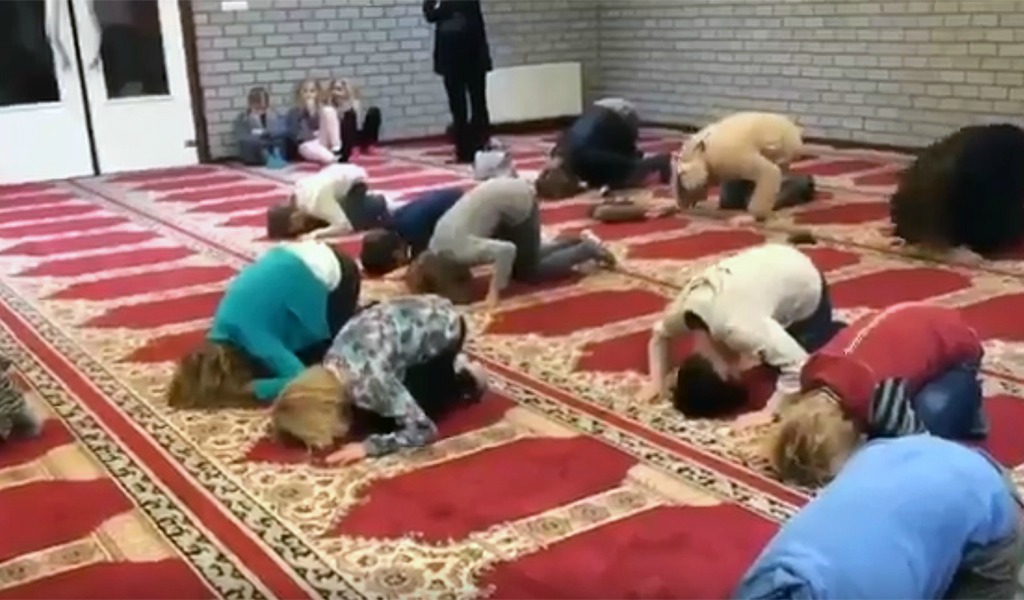 While jihadists across the globe are busy slitting throats, American school children are taught that jihad is an “inner struggle” and Islam means “peace.” While Muslim rape gangs destroy the lives of teenage girls in England, American teenagers learn that Muhammad was a champion of women’s rights. And although American students are taught all the gruesome details of the Atlantic slave trade, they learn little if anything about the Arab slave trade which took many more lives.

If Islam is part of the curriculum in your child’s school—and it probably is—you can be almost certain that it is treated in a deferential fashion. If your child’s school uses prepackaged materials that look as though they were vetted by a committee of Muslim apologists, they probably were. And if you notice that your boy or girl is practicing Arabic calligraphy, don’t worry. He or she is just writing that “there is no God but Allah, and Muhammad is his messenger.”

If your child is in college, it will be more of the same—more indoctrination about Islam’s peaceful nature, its many contributions to the arts and to science, and the victimization of its followers at the hands of Christian imperialists. Your child will also learn to get used to special prayer rooms for Muslims, special bathroom facilities, and sex-segregated pools and gymnasiums. If he or she happens to be enrolled at Oregon State University, he or she will be asked not to eat in “shared spaces” during Ramadan to avoid offending Muslims.

It doesn’t matter if your child attends a Catholic school or college as Catholic schools are as likely as their secular counterparts to run interference for Islam. Your second-grader might be reading My Muslim Friend—a Pauline Press book that depicts Muslims as more devout than most Catholics. Your high school student, meanwhile, will learn that Islam gently “expanded” into neighboring territories, when, in fact, Islamic forces ruthlessly conquered them. What he or she won’t hear is anything critical of this religion of peace. In the Orlando diocese, a sixth-grade teacher was fired for providing students with a printout of St. John Bosco’s negative assessment of Islam. Why? Well, because, as an associate superintendent put it, “the information provided … is not consistent with the teachings of the Catholic Church.”

It’s not just what’s taught in the classroom that ought to concern parents. Numerous Catholic colleges have declared that they stand in solidarity with Islam, and others make a point of celebrating International Hijab Day. Some Catholic high schools and colleges even have special prayer rooms set aside for Muslim students. For example, St. Ambrose University in Iowa recently opened a sex-segregated prayer room for Muslim students complete with sinks for ritual foot-washing.

Islamic indoctrination in public and Catholic schools is far more extensive than you might think. But don’t feel bad if all this is news to you. Adults who don’t have children in school don’t usually keep tabs on what goes on inside school buildings. And even parents with children still in school generally don’t know the details of the curriculum. Much of what happens in school is terra incognita for parents.

For proof, consider that for many decades, the vast majority of parents had no idea what was being taught under the rubric of sex education. When they did find out it was a bit too late. The damage had already been done.

Why didn’t they try harder to find out? For one thing, most couldn’t imagine that what was being offered to their sons and daughters was as outrageous and obscene as it actually was. For another, they trusted the teachers. Teachers were, and still are, assumed to be caring professionals who would never put children at risk.

That’s true of many teachers, but the educational establishment in America leans heavily to the left. And it’s the establishment, not the teacher that sets the curriculum. The educational leadership—the administrations, the teachers’ unions, and the schools of education that train teachers—is composed in large part of left-liberal ideologues. Moreover, the people directly involved in sex education are often individuals who have a personal stake in destroying sexual norms.

Much of the Sexual Revolution agenda was being pushed on middle-school students long before it was accepted by the general public. Subjective morality? Recreational sex? Gay marriage? Transgenderism? It was the schools, not the courts, which paved the way. Much of the left’s culture war against traditional morality was initially waged in the classroom—and almost always without parental knowledge or consent.

So it shouldn’t come as a surprise that the same people who sexualized American children without parental knowledge, now feel no qualms about Islamizing them.

If this is difficult to believe, consider three points:

The leftist elites don’t care if Islamization spells the end of our culture. That’s what they want also. So the steady incremental Islamization in schools will proceed apace with little opposition just as did the sexualization of the students. It will proceed apace because most parents can’t imagine that their local schools would cooperate in advancing the Islamic agenda while at the same time belittling the Western Christian heritage. For many parents, the first indication that something is wrong will come when, at some future point, their daughter returns from school wearing the mandatory hijab.

As I’ve noted, Catholic schools aren’t immune to this lemming-like impulse to take the leap of faith into the wild blue multicultural yonder. Catholic teachers are trained, for the most part, in the same institutions as their secular counterparts. Moreover, what’s taught in most Catholic schools of education doesn’t differ a whit from what’s taught at the local state teachers’ college. For the most part, the Catholic universities that prepare teachers subscribe to the same theories, methods, and assumptions that prevail in secular colleges.

All of this wouldn’t matter as much if bishops were doing their job of teaching and shepherding. But the bishops, who have ultimate authority over diocesan schools, are still caught up in the Vatican II-era fantasy that Catholicism and Islam are just two sides of the same coin. They can’t be counted on to correct the schools because they share those same naïve assumptions about the Islamic faith. In short, the bishops look at Islam through rose-colored spectacles. When the wolf in sheep’s clothing shows up at the schoolhouse door, all they see is a sheep and an opportunity to extend a warm welcome.

Schools are arguably the chief facilitators of Islamization in America. Under the guise of multicultural studies and anti-bullying curricula, students are taught a whitewashed version of Islam that will leave them unprepared to recognize or resist stealth jihad when they grow older. The classroom has already been used to indoctrinate students to accept the left’s radical sexual agenda. There is good reason to believe that schools are now being turned into centers of Islamic indoctrination.

If you still find this difficult to entertain, consider that the Saudis have long been heavily invested in shaping America’s perception of Islam. A 2004 report by Harvard researcher, Sandra Stotsky, and a 2005 four-part investigative report by the Jewish Telegraphic Agency (JTA), revealed that after 9/11 the Saudi government ramped up attempts to introduce Islam-friendly materials into k-12 schools. According to the JTA, “Saudi Arabia is paying to influence the teaching of American public-school children … these materials praise and sometimes promote Islam, but criticize Judaism and Christianity.” Massive gifts to Harvard and Georgetown—used to develop the curriculum materials—gave credibility to the tendentious programs. Mayor Giuliani may have turned down Saudi money, but academia has been happy to accept it.

Still doubtful? Then take a look across the Atlantic where the art of Islamizing schools is a bit further advanced. A series of investigations in 2014 by the London Telegraph revealed that “there is indeed an organized group of Muslim teachers, education consultants, school governors, and activists dedicated to furthering what one of them describes as an ‘Islamizing agenda’ in Birmingham schools.” In short, the paper had uncovered a broad-based conspiracy by Muslims to take over the schools in a major English city. The plot, to which the conspirators gave the rather obvious code name “Trojan Horse,” involved removing secular head teachers and replacing them with radical Muslim staff, segregating classrooms by putting girls in the back, and introducing Islamic prayers. More than 21 schools were targeted in Birmingham, and similar plots were uncovered in Bradford, Manchester, and parts of east London.

Most Americans would find it hard to imagine that the situation in Birmingham could ever come to our shores. But, if you remember your Shakespeare, Macbeth was convinced that Birnam Wood could never come to his castle at high Dunsinane Hill. But it did, nevertheless.

That’s a pretty loose analogy, but since Macbeth takes place in the British Isles and since Birnam and Birmingham share six letters in common, it’s close enough for our purposes. As you may recall, Malcolm’s conquering army comes to Dunsinane Hill by means of stealth and camouflage. And it’s by stealth that Islamists plan to Islamize the U.S. Unfortunately, it doesn’t take too much stealth to fool people who have been taught to believe that Islam means “peace” and jihad is “interior struggle.” The left, meanwhile, is providing plenty of camouflage.

No matter how many soldiers we send to fight in the Middle-East, the main battle in the clash of civilizations is being waged in America’s classrooms.

This article originally appeared in the June 21, 2018 edition of Crisis.