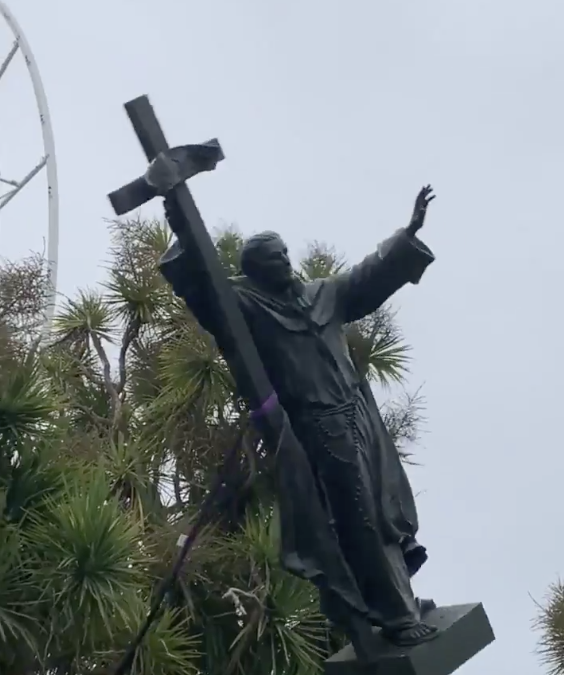 In case you hadn’t noticed, a new fundamentalist religion has been born in the streets of America.  It’s the religion of Woke—the religion of people who believe they have been given a special revelation about the nature of society.  They have discovered that American society is irredeemably racist and heteronormative and, therefore, must be torn down.

They were blind but now they see.  They were asleep but now they’re woke.  And they think you ought to be woke too—even if it takes the violent occupation of city streets and squares to wake you up to the truth of their religion.

As I said, it’s a fundamentalist religion.  The religion of the woke people is narrow, puritanical, and righteous.  Those who don’t conform to its catechism—the heretics—are quickly expelled or “cancelled.”  As with other fundamentalist faiths, the new religion appeals not to reason, but to emotions.  The proof of one’s faith is shown by the repetition of mindless slogans and by passionate demonstrations of commitment.

Strangely—or perhaps not so strangely—the woke people do not worship a Supreme Being.  They look not to God, but to the State for the answers to life’s problems.   The promised land is not in heaven, but here on earth.  And it can be achieved once the woke people take the reins of government.

Sounds familiar?  It should.  The religion of Woke is not really a new religion.  It’s simply one more iteration of an old religion—the religion of humanism. The basic assumption of this religion is that there is nothing higher than man and the institutions he has created.  Despite the pleasant-sounding name, “humanistic” religions regularly end up committing human sacrifice of one kind or another.  The good of the individual is sacrificed to the needs of the state. Pre-born babies are sacrificed to “quality of life.”  And dissenters from the official creed are simply exterminated.

It’s well-known that idealists and humanitarians were initially attracted to movements such as Nazism and communism because of their humanistic promises.  Indeed, the Nazi Party platform of 1934 was in many respects a “progressive” document which promised cradle-to-grave welfare for all German citizens.

What is less well-known is that both Nazism and communism were, in effect, religious movements which attempted to replace worship of God with devotion to the leader—Hitler, in the case of Nazi Germany, and Lenin and Stalin in the case of Soviet communism.  Even today, North Koreans are expected to treat their own “Dear Leader” as a divinity, and in some Chinese towns, Christians are being forced to replace Christian symbols with portraits of Chairman Mao Zedong and President Xi Jinping.

The religious impulse is built into human nature, and if it is not directed toward God, it will be directed toward some unworthy substitute for God.  In the process, God Himself becomes the enemy.

It’s not surprisingly then that the woke faithful, like their communist compatriots, tend to be anti-Christian, anti-Semitic, and anti-God.  They have broken stained glass windows, torn down statues of saints, and vandalized dozens of churches and synagogues.  Hostility to religion is a hallmark of leftist movements and the Woke religion is nothing if not a leftist movement. The Red Guard of the movement are Black Lives Matter and Antifa, both of which are avowedly Marxist groups.

The most visible manifestation of the Woke religion are the black-clad rioters who tear down statues and set fire to public buildings.  But the Church of Woke is much larger than that.  Its number includes politicians, local and federal office holders, teachers unions, professors, television anchors, celebrities, young professionals and middle-aged CEOs.  Moreover, the Church of Woke is engaged in ceaseless evangelization.  As Robby Starbuck observed in a recent Federalist piece:

The Church of Leftism…has established a veritable army of missionary- teachers to convert children to its radical faith.

Which raises a question.  How is the Catholic leadership responding to the rise of this new religion?  Not only is the religion of Woke drawing souls away from Christianity, it is, in many respects, diametrically opposed to the Christian faith. For example, Black Lives Matter, which is a member in good standing of the Woke alliance, strongly supports abortion and the LGBT agenda while simultaneously seeking to dismantle the traditional family.

Like other leftist “religions,” the religion of Woke is a religion of rebellion.  Whatever their immediate complaint, the ultimate complaint of the woke people is against God and the order He created.  In the case of the LGBT-supporting Black Lives Matter, the rebellion is against the God-ordained institution of marriage as between one man and one wife—the institution that God established “from the beginning of creation” (Mk. 10:6).

One would think that the USCCB should issue a statement to the effect that a Catholic cannot in good conscience join BLM or support them.  Some bishops and priests have made that point, but most seem content to sit on their hands, waiting to see how The New York Times handles the issue.  Meanwhile, several U.S. priests have been reprimanded or suspended by their bishops for having dared to criticize the BLM organization.

Besides, the hierarchy have more pressing issues to worry about.  They can’t be expected to bother their heads about the possible destruction of American society by true believing communists when the fate of our relationship with “Mother Earth” is at stake.

Under the leadership of Archbishop Vincenzo Paglia (a well-known patron of earthiness), the Pontifical Academy for Life has issued a document which claims that the Covid-19 pandemic is a punishment for “depredation of the earth.”  In other words, for sins against the environment.

It seems strange to be focusing on the environment of the rainforests and grasslands when the environments of Chicago, Minneapolis, Portland, and Seattle are going up in smoke.  But there is good precedent for the Academy’s concern for “Mother Nature,” because Pope Francis made the same point a few months ago.  He speculated that the coronavirus pandemic was “nature throwing a tantrum” in response to ecological sins.

More recently, the Catholic Campaign for Human Development (CCHD), the anti-poverty arm of the USCCB, announced a $500,000 grant to Direct Action & Research Training Center (DART) to fight climate change.  According to Bishop David O’Connell of Los Angeles, the “effects of climate change devastate poor communities around the country.”

Yes, once the sea level eventually rises to inundate Miami Beach and the rest of the Atlantic seaboard, it will undoubtedly have a devastating effect on the poor, the rich and everyone in between.

But in the meantime, there is a different type of climate change that is already devastating poor communities in hundreds of cities, and neither the bishops not the Vatican has had much to say about it.

In cities across the country, temperatures are soaring as the advance troops of the militant Church of Woke set fire to buildings and blocks full of businesses.  And as the businesses go up in smoke, so do the chances of the poor for rising out of poverty.  Moreover, when times get tough in the cities, the middle and upper-middle classes tend to move out, leaving the poor stranded in urban areas with shrinking income bases. So, maybe it’s time for the bishops to get their heads out of the clouds of climate change and look around at the damage that the Social Justice Warriors (many of whom the bishops indirectly support) have done to the poor.

There’s one final irony to be noted.  Ever since the beginning of his papacy, Francis has reserved his harshest criticism for religious fundamentalists.  He has never ceased to scold them for their “rigidness,” “narrowness,” and “intolerance.”  The “fundamentalists” he mainly has in mind are traditional Catholics, but he admits that the type can be found in every religion.

Shouldn’t he, then, take issue with the religion of Woke?  It is, after all, the most fundamentalist faith on the planet.  It’s closest competitor in this regard is Islam, but the edge has to be given to the Woke.  There is such a thing as a moderate Muslim, but you can’t remain moderately woke for long.  If you don’t quickly convert to full wokeness, you will be subject to an inquisition, and, if found guilty, the righteous members of the congregation will attempt to destroy your life, and, if possible, the lives of your spouse and children.

If Francis really wants to make the world safe from fundamentalists, he should take a closer look at the religion of the Woke.  He will find many things that should disturb him.

He is, for example, a great fan of dialogue.  He sees it as the solution to every problem.  But, as you will have noticed, the Woke people don’t want to dialogue.  They want to do all the talking, and they want you to shut up.  Just as the Nazis in Hollywood movies “have ways of making you talk,” the Woke have ways of silencing you.  And, as a recent survey shows they’ve been hugely successful.

The survey, which was release by YouGov and the Cato Institute revealed that sixty-two percent of respondents find that the “political climate these days prevents them from saying things they believe because others might find them offensive.”  Almost a third feared that saying the “wrong” thing could get them fired.  The only category of persons in which a majority felt free to express themselves were “strong liberals,” i.e. the Woke.

If Pope Francis is true to his principles, he ought to take the Church of Woke to task for its un-nuanced view of the world.  Perhaps at this very moment he is penning an Encyclical to help Catholics better understand the dangers of this new religion.  But don’t count on it.

Pictured above: A Statue of St. Junipero Serra is pulled down in Golden Gate Park