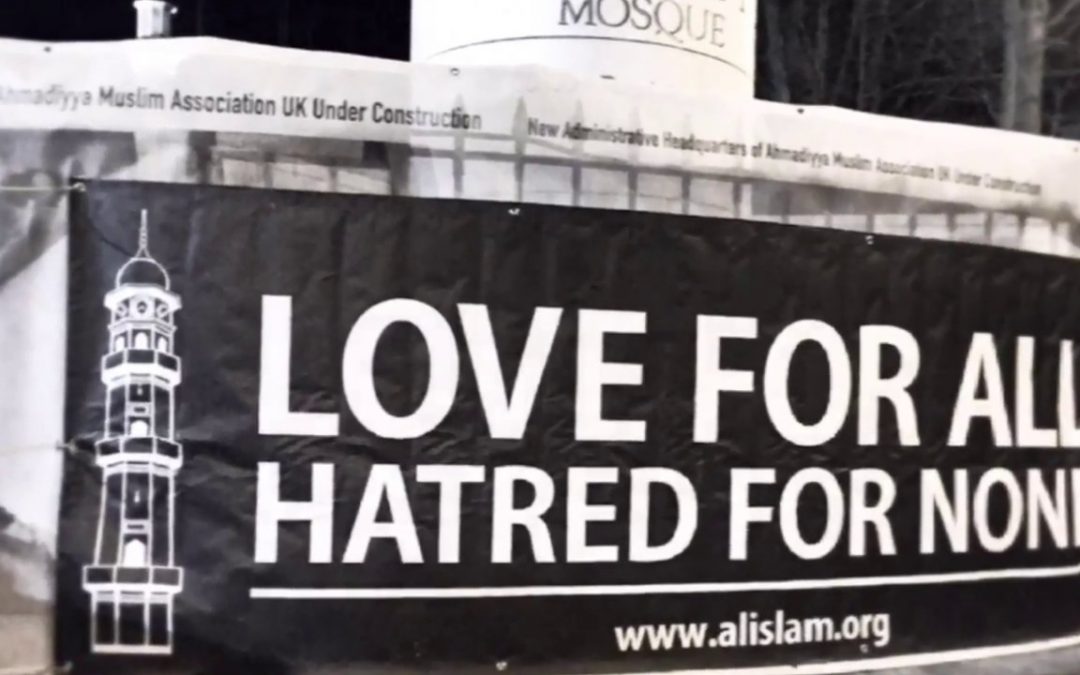 “True Islam is a religion that wholly rejects all forms of terrorism.”

So says an online pamphlet put out by the True Islam Campaign. The pamphlet lists ten other truths about “true Islam,” including “True Islam believes in the equality, education, and empowerment of women,” “True Islam encompasses the universal declaration of human rights,” and “True Islam recognizes no religion can monopolize salvation.”

Each truth is accompanied by a page or so of text providing verses from the Koran and other Islamic sources to support the assertion.

The True Islam Campaign says that it hopes to counter the menace of extremism which, it says, is fueled by ignorance of Islam. Thus:

Extremists like ISIS depend on ignorance of Islam to grow. That’s why the more people know about Islam’s true teachings—and what Muslims truly believe—the less they’ll fall for ISIS’s propaganda.

The pamphlet even comes with an invitation to an Iftar dinner (the dinner that ends the fast each day during Ramadan): “Be our dinner guest.  Meet your Muslim neighbors. All welcome.” The invitation also includes a “Find a Mosque near you” button.

Who could object? Americans believe that the vast majority of Muslims are moderate, and this looks like just the group to make the moderate case.

As you may have guessed, however, I do have some objections. Although the campaign claims to express “the values, beliefs, and ideals of the entire Muslim community,” it decidedly does not speak for the global Muslim community. Since the campaign is sponsored by the Ahmadiyya Muslim Community in the U.S., and since all the Ahmadiyyas in the world make up only about 1 to 1.5 percent of the worldwide population of Muslims, they can hardly claim to speak for the “entire Muslim community.” What’s more, the Ahmadiyya (or Ahmadi) sect is widely regarded as a heretical group, and is often targeted for persecution by other Muslims. It’s no wonder that the Ahmadis are concerned about extremists, as they themselves have long been victims of extremist violence.

But it’s not just the extremists who consider them heretics. Mainstream Muslims do as well. Orthodox Muslims have numerous reasons for classifying Ahmadis as heretics, but the chief reason is that their founder, Mirza Ghulam Ahmad (1835-1908), denied that Muhammad was Islam’s final prophet.  Indeed, Ahmad claimed that he himself was a prophet who had received divine revelations. Not only that, he also claimed to be the long-awaited Mahdi, as well as the Messiah who Muslims expect to appear in the end times.

Christians might well wish that his claims were true, especially his claim that he had been chosen by Allah to renew Islam. It would be nice to think that the Ahmadi version of Islam really does represent true Islam. That’s because it’s a kinder, gentler version of Islam—one that is much closer to the wishful fantasy that many Westerners mistake for the Islamic faith.

In effect, Ahmad tried to put a smiley face on Islam. He seemed to genuinely believe it was a religion of peace and love. And, although he held the Koran to be the highest authority, he more or less ignored all the hard sayings in its pages.

In many ways he was like an earlier version of Pope Francis. Like Francis, he emphasized tolerance and acceptance, he believed that spirituality was more important than doctrine, and he believed that God wills a diversity of religions. Accordingly, the Ahmadi community regards Zoroaster, Krishna, Buddha, and Confucius as prophets along with Jesus, Moses, and Muhammad. Unlike orthodox Muslims, Ahmadis tend to look at Islam as an ever-evolving faith that is in the process of syncretizing a variety of religious beliefs.

In many respects, the Ahmadiyya sect looks like the moderate faith that many Westerners believe is adhered to by the vast majority of Muslims.

The only problem with this rosy scenario is that the vast majority of Muslims roundly reject the Ahmadis. Pakistani law prohibits Ahmadis from calling themselves Muslims, Saudi law prohibits them from performing the pilgrimage to Mecca, and there is a general consensus in the Muslim world that Ahmadis are not really Muslims.

True Meaning of Jihad
Still, it’s useful to look more closely at the Ahmadis’ approach to non-Muslims because they do employ methods that are quite similar to those used by more orthodox Muslims. For example, both groups have a tendency to whitewash the more threatening aspects of Islam—such as jihad.

If you look at Islamic websites dedicated to attracting non-Muslims, you’ll most likely come away with the impression that jihad is an interior spiritual struggle against one’s base desires. This interpretation is usually presented in the context of the “greater” versus the “lesser” jihad. According to an oft-quoted hadith:

The prophet returned from one of his battles, and thereupon told us, “you have arrived with an excellent arrival, you have come from the Lesser Jihad to the Greater Jihad—the striving of a servant [of Allah] against his desires.” (Tarik al-Baghdadi 13/493)

Since most non-Muslims don’t even know what a hadith is, they’re less likely to know that many Islamic scholars classify this as a “weak” hadith, and that some consider it to be a complete fabrication. Sahih Bukhari, the most authoritative collection of hadith, contains almost 200 references to jihad, and all of them assume that jihad means armed warfare. Likewise, there are several verses in the Koran that make it clear that Muhammad considered the fighting kind of jihad to be more excellent than the praying kind (e.g., 9:19-20).

Selective Use of Quotations
Another tactic used by both Ahmadis and other Muslim apologists is the selective use of quotations. For instance, a handful of verses from the Koran which suggest that Islam is a peaceful religion will be produced, but none of the over one hundred verses which advocate violent jihad will be mentioned.

Perhaps the most frequently cited verse is 5:32. The True Islam pamphlet puts it this way:

Again, who could object? But though the verse seems highly reassuring, some qualifiers have been left out of the Ahmadi excerpt. For one thing, it’s not mentioned that the verse is adapted from the Torah. For another, the qualifying clause, “unless it be for murder or for spreading mischief in the land,” is left out.  But the biggest omission is the absence of any mention of the very next verse:

Those that make war against God and His apostle and spread disorder in the land shall be slain or crucified or have their hands and feet cut off on alternate sides, or be banished from the land (5:33).

Since Muhammad considered anyone who rejected his message to be spreading disorder (“mischief” in some translations) in the land, verse 5:33 effectively cancels the peaceful verse that precedes it. Moreover, a few verses further on we read: “As for the man or woman who is guilty of theft, cut off their hands to punish them for their crimes” (5:38).

It’s not just Ahmadis who leave out the amputation and crucifixion verses. Most Muslim apologists who cite the saving-all-mankind verse do likewise. Non-Muslims need to be on their guard when perusing this kind of literature because it is intended to deceive.

As one last example, let us take the True Islam claim that “True Islam encompasses the universal declaration of human rights.” Here they’re counting on the generally low level of historical knowledge that afflicts the “woke” generation. The fact is, most Islamic nations were unhappy with the UN’s Universal Declaration of Human Rights, and as a result the member states of the Organization of Islamic Cooperation met in Cairo in 1990 to adopt the Cairo Declaration on Human Rights in Islam. The Cairo Declaration guarantees many of the same rights as the UN declaration, but it makes them subject to the limits set by sharia law—which means that the “guarantee” doesn’t count for much. So, once again, the True Islam claim turns out to be quite deceptive.

But, one might ask, why focus on the Ahmadis? What’s the point of beating up on a relatively benign branch of Islam? What harm would it do if someone were to convert to this moderate belief system?

Why Focus on the Ahmadis?
Well, I must confess that the initial reason to focus on the Ahmadis was simply that a friend forwarded their campaign literature to me. It’s convenient to write about something that’s right before your eyes rather than a similar example that’s only half-remembered. However, there are three other reasons. The first is that the Ahmadis use deceptive recruitment techniques that are comparable to those used by other Muslim groups. It’s important to be forewarned about these misleading practices because the average person won’t notice them. He won’t notice the selective use of quotations or that various claims are often in conflict with historical facts. The Ahmadi pamphlet warns that ignorance of Islam fuels extremism, yet it deliberately leaves the reader ignorant of huge chunks of Islam. So do other Islamic sites.

The second reason to worry is that a convert to Ahmadi Islam doesn’t necessarily remain an Ahmadi. There’s a phenomenon among new converts to fundamentalist and evangelical Christianity called “faith tripping,” whereby the new Christian goes from church to church or denomination to denomination in search of a more intense religious experience. Ahmadis are not exempt from this temptation, and they may be more prone to it since they emphasize openness to other traditions.

In addition, new converts tend to be more zealous than cradle believers, and they are anxious to learn as much as they can about their new faith. This is not usually something to worry about with Christian converts, but with Muslim converts it’s a different matter. Indeed, it turns out that a significant number of jihad attacks are committed by recent converts to Islam. Moreover, a number of studies have shown a link between increased devotion in Muslims and increased radicalization. Not satisfied with the bland expression of faith offered by the Ahmadis, a new convert who goes deeper into Islam may discover that the extremists are actually more faithful to the core teachings of Muhammad than the Ahmadis. In other words, the Ahmadi experience can be likened to a mild drug that may serve as an entrée to the use of more powerful and dangerous substances.

The third reason to be concerned is that even those who aren’t converted by reading a True Islam-type pamphlet will still form an impression. And for many, it will be a positive impression. After all, the campaign claims that true Islam is against extremism, for the empowerment of women, and for universal human rights. A typical reader might conclude: “This is not for me. I’m satisfied with my own faith. But it’s nice to know that Islam really is a peaceful religion.”

What he reads doesn’t persuade him to convert, but it does confirm the Disneyfied version of Islam he has learned from other sources: the mainstream media, his teachers, and his priest, minister, or rabbi. The fact that the majority of “meet-your-Muslim-neighbor” get-togethers are sponsored by churches speaks volumes about Christian naïveté in this matter. What Christians generally learn in these encounters is a prepackaged and highly sanitized version of Islam.

In summation, the chief danger of Muslim proselytizing is not that it leads to a flood of conversions to Islam, but that it confirms our complacency about it. It reinforces the consoling but unexamined assumptions that are already prevalent in our society, namely, that Islamic values are just like our own, that Islam is a moderate religion, and that there’s nothing whatsoever to worry about.

This article originally appeared in the June 3, 2019 edition of Crisis.