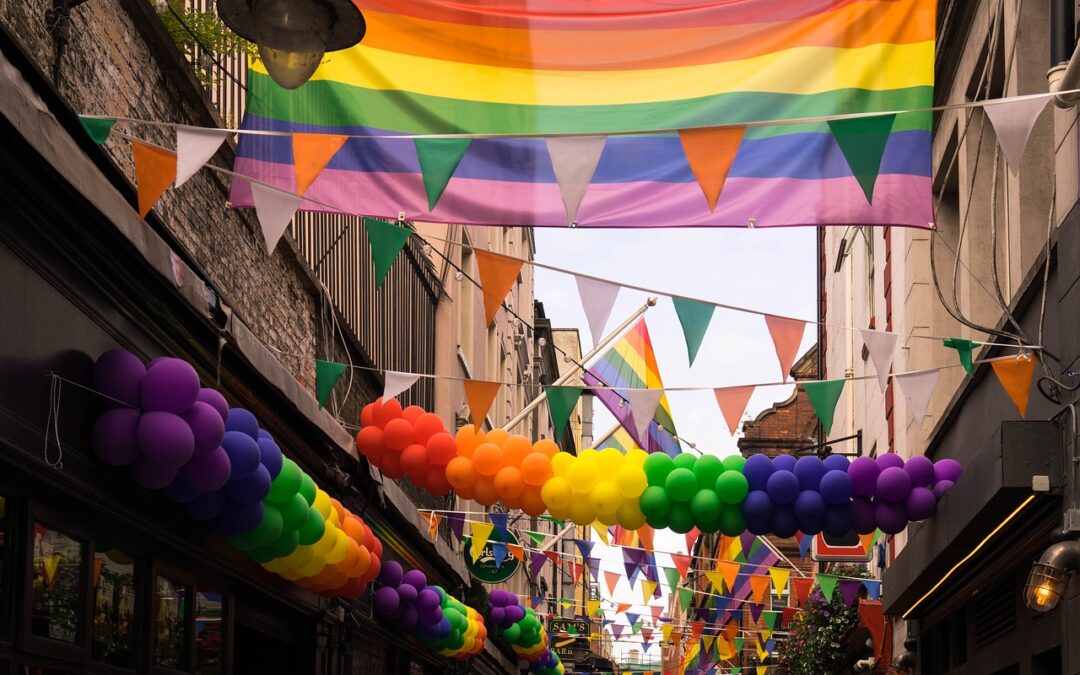 In “Francis Forgives Everyone,” I suggested that the main thrust of the Francis papacy is to de-emphasize sin.

But if Francis wants to forgive everyone, he’d better hurry up before some European bishops beat him to the punch. Just recently, the Flemish bishops of Belgium published a document for the pastoral care of homosexuals, which included a liturgical blessing for same-sex couples.

As several Catholic theologians were quick to point out, however, the blessing is problematic because, unlike the general blessing at the end of Mass, it is intended to bless a specific arrangement—namely, a same-sex union.

Some fear that the proposed blessing (the Flemish speaking bishops plan to present it to Francis later this year) could tear the Catholic Church apart. That may seem like an exaggeration, but there is good reason to believe that the Belgian bishop’s proposal is meant to bring things to a head by forcing Francis’s hand on the issue of same-sex “marriage.”

One reason to think so is that the Congregation for the Doctrine of the Faith (CDF)—the ultimate authority on doctrinal definitions—has already made clear that “the Church does not have and cannot have, the power to bless unions of persons of the same sex.”  The document was published in March of 2021 with the express approval of Francis.

The CDF isn’t saying that a priest can’t give his blessing to a homosexual individual, only that he can’t bless a same-sex union.  By the same token, the Church can’t bless the union between a man and a woman living in adultery.  The problem with the “Belgian blessing” is that it is intended to bless same-sex unions—the very thing that the CDF says the Church has no power to do.

To a non-Catholic, this may seem like a tempest in a teapot, but it is, in fact, a very big deal because it constitutes a challenge to the Church’s teaching authority.  The Belgian bishops are saying, in effect, that the Church has been in error to teach that homosexual acts are sinful.  This puts the CDF on the spot, it puts Francis on the spot, and it puts the Church in danger of schism.

It could also prompt Francis’s resignation.  Although Francis is quite obviously a friend of the LGBT movement in the Church (just look at his appointments), he seems also to have reservations about going too far too fast.  Despite what some conservative Catholics may think, Francis does appear to have some fear of God—and also of the Devil.  Perhaps, he would prefer to leave the decision to his successor.

Coincidentally, one of the prelates who is often mentioned as a possible successor to Francis just happens to be the top bishop in Luxembourg—the small country which borders Belgium.  As president of the Commission of the Bishops’ Conference of the European Union (COMECE) Cardinal Jean-Claude Hollerich is also the top bishop in Europe.  As an additional sign of his faith in Hollerich, Francis recently appointed him as the relator general of the much-heralded Synod on Synodality.

But perhaps the most salient fact about Cardinal Hollerich is that earlier this year he asserted that the Church’s prohibition of sodomy is now “false” because “the sociological-scientific foundation of this teaching is no longer correct.”

Should Hollerich be elected pope and should he continue to insist that the Catholic Church’s teaching on homosexuality is erroneous, it will likely set off a firestorm of controversy both inside and outside the Church.

Another key player in this drama is Father James Martin, SJ. who is currently the most prominent Catholic advocate of the LGBT movement.  Martin says that chastity is not required of homosexuals because the teaching (to remain chaste) has not been “received” by the Catholic LGBT community.  Martin also states that Catholics must “reverence homosexual unions.”  In short, like Cardinal Hollerich, Martin seems to be saying that existing Church teaching about homosexuality is in error.

It’s not as though Francis is firmly opposed to the position taken by Hollerich and Martin.  Hollerich has said that he is “in full agreement with Pope Francis.”  Moreover, Francis has showered praise on Fr. Martin, encouraged him in his work, admitted him to a private audience, and appointed him as a consultant to the Vatican’s Secretariat for Communications.

If the debate about homosexual unions does lead to some kind of schism, it will most likely result in a schism between orthodox (traditional) Catholics and “progressive” Catholics like Francis, Hollerich, and Martin.  The blessing of same-sex unions may well be the final straw for those Catholics who not only object to Francis’s “progressive” reforms, but also doubt whether he is really the legitimate pope.

As I have suggested elsewhere, the ultimate aim of Francis and other progressives is not to reform the Church but to transform it into a humanistic rather than a supernatural faith.

Although the Church has always been in some sense a humanitarian faith, there are some crucial areas in which a purely humanistic philosophy is opposed to Christian teaching.

The main point of division is sin.  Although the Church affirms that we are made in the image of God, it also maintains that we are sinners in need of a Savior.  Although Christ mingled with prostitutes and tax collectors, he did not bless their sins.  Rather, he told them to sin no more, and to follow him.

By contrast, humanists tend to think that people are fine the way they are.  Like Francis, they may be concerned with corporate sins and sins against the environment, but not so much with personal sins.

But from an orthodox Christian perspective, minimizing sin is self-destructive.  That’s because salvation from sin is the essence of the Christian story.  When you take away sin, you take away the whole rationale for Christianity.  If I’m okay the way I am, why do I need the “transformation in Christ” that Paul speaks of in his epistles?

The main argument of the self-esteem gurus and of their counterparts within the Church was that people who feel good about themselves aren’t tempted to do bad things.  As a result, examination of conscience and frequent confession gave way to an emphasis on self-acceptance—on learning to love yourself just the way you are and on having confidence that God loves you just the way you are.

Fr. Martin is, of course, a product of this 60’s-style “follow-your-feelings” approach to morality.  His fuzzy argument about the LGBT community not being bound by the rule of chastity because they haven’t “received” it is evidence of this.  For Fr. Martin, the only thing that matters is that you feel good about yourself and your relationship with partner X.  Nothing else is required and you can be sure that God will smile on your union.

One hitch in the self-esteem hypothesis that was apparently overlooked by Martin is that further research revealed that psychopaths and prison inmates tend to have exceptionally high self-esteem scores. Feeding one’s self-esteem doesn’t necessarily result in better behavior, and it can result in worse.  Consider the recent experiments with reducing or eliminating bail, defunding the police, and giving their jobs to idealistic social workers.  Such experiments often feed the sense of law-breakers that they are special, that the rules don’t apply to them, and that there should be no consequences for their behavior.

And that should give us second thoughts about the current eruption of self-acceptance theory among progressive Catholics.  A certain regard for one’s self—self-respect—is good up to a point.  But beyond that point it can lead to self-absorption and self-centeredness.  Catholics and other Christians are called to avoid this temptation and to examine their conscience in light of scripture and tradition.  But progressives think it’s enough for people to simply celebrate themselves as they are.  But “celebrate yourself” is a very slippery slope and it can lead to some dark places.  Currently, for example, some elements of the pro-choice movement have been calling on women to celebrate their abortions.

Cardinal Hollerich approaches the matter from a somewhat different angle than Martin, but not one that inspires confidence in his ability to lead the Church.  What’s missing in the theology of Hollerich (and also Martin) is any sense of objective morality—what Cardinal Francis Arinze refers to as “the order established by God the Creator.”  According to Church teaching and tradition, the nature of marriage is revealed to us both by scriptural revelation and by natural law— “the laws of nature and of nature’s God” referred to in the Declaration of Independence.  In place of the order of marriage established by God, Cardinal Hollerich offers thinly disguised relativism.  Hollerich seems to think that criticism of same-sex unions is founded on outmoded biology and anthropology and must now be revised in light of recent advances in sociology and science.  But he fails to explain how morality can be deduced from either sociology or science.  Perhaps by polling a sufficient number of people?  By consulting Kinsey?  By capturing the elusive pregnant man? The effectiveness of sociologically and scientifically “correct” sex education can be gauged by the wreckage of the sexual revolution.

The damage we have already seen suggests that we can’t afford any more experiments with readjusting the order established by God to suit our own inclinations.  If the Belgian bishops don’t accept natural law (which is based on biological and anatomical facts) or revealed law, then what is to be the standard?  Is each person to be a law unto himself or herself?

If European bishops continue to mislead Catholics about the nature of marriage, their efforts will turn out to be much more of a curse than a blessing.

This article originally appeared in the October 4, 2022 edition of Front Page.