Georgetown, Slavery, and the Riots in Sweden 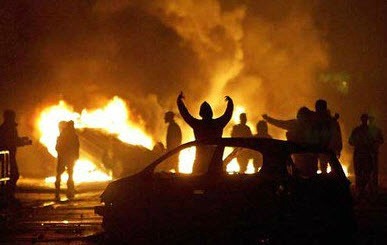 Two years ago, Georgetown University made a show of repenting of its past connections to slavery by renaming two buildings whose namesakes had once sold slaves.

It might be expected then that when a Georgetown faculty member defends slavery, not just online, but in the course of a ninety-minute lecture, the reaction would be swift and severe. We would expect that the wayward academic would be relieved of his duties and sentenced to a re-education program, or else be fired outright.

Unless, of course, he was a Muslim defending Islamic slavery—in which case the rules of multicultural diversity come into play, and all is forgiven. The strongest reaction the administration could muster was this statement:

That anemic response was all I could find when googling the words “Georgetown responds to professor who defends slavery.” So when it becomes known that two long-dead Jesuits profited from the sale of slaves, Georgetown appoints a panel of sixteen and renames two of its buildings, but when a living, breathing faculty member defends slavery (and rape), it “does not necessarily represent the University’s position.”

According to the official response, Georgetown is “committed to academic freedom and the ability of faculty members to freely pursue their research and express their analysis.” But if one digs a little deeper, it appears that high-minded commitment to academic freedom is not the only consideration.

The professor in question, Jonathan A.C. Brown, is a convert to Islam and is the director of Georgetown’s Alwaleed bin Talal Center for Muslim-Christian Understanding. Twelve years ago, Prince Alwaleed contributed $20 million to the Center. And one supposes that he and other Arabs have contributed more in the meantime. In addition, the Center has become the go-to place for establishment people in government, media, and the Church to find research to support their view that Islam means peace, and that anyone who disagrees is a bigoted “Islamophobe.”

So the Center brings both money and prestige to Georgetown. Given those circumstances, it might not be prudent for Georgetown to make a fuss about a “minor” matter such as Islamic slavery. With their gift, the Saudis, it seems, have purchased Georgetown’s silence.

What exactly did Professor Brown say? Here are some samples so you can judge for yourself whether Georgetown’s tepid response was adequate. On February 7, 2017, in a speech to the International Institute of Islamic Thought in Herndon, Virginia, he said:

In his Facebook page, Brown is more explicit: “Slave women do not have agency over their sexual access, so their owner can have sex with them.”

Professor Brown’s observations provide a glimpse into the Muslim mind—a glimpse that Georgetown officials would prefer you not have. Almost the central project of the Center for Muslim-Christian Understanding has been to combat “Islamophobia”—by which is meant an irrational fear of Islam. But Professor Brown’s remarks suggest that people who fear Islam have good reason to do so.

Go back to his comment on Muhammad: “The Prophet of God had slaves… Are you more morally mature than the Prophet of God?” For Brown and for the vast majority of Islamic scholars, that is the clinching argument: Muhammad could do no wrong.

Some Catholics like to comfort themselves with the notion that Catholics and Muslims have similar codes of morality. But, as Brown’s comments suggest, Islamic morality is based largely on the example of Muhammad. Consider this item from his Facebook page: “It’s not possible to say that slavery is inherently, absolutely, categorically immoral in all times and places since it was allowed by the Qur’an and the Prophet.”

There is in Islam no rational, natural-law basis for discerning right from wrong. What Muslims have, for the most part, is the example of Muhammad—the “perfect man.” When defending Muhammad’s marriage to nine-year-old Aisha, Brown says: “You cannot say from a Sharia perspective that what the Prophet did was wrong because the Prophet can’t commit sins.” That’s the way Islamic morality works. Muhammad married a nine-year-old, so marriage with underage girls is permissible. Muhammad had slaves, so slavery can’t be immoral. Muhammad had sex slaves, so that can’t be wrong either. Muhammad killed infidels for no other reason than that they were unbelievers. Therefore, unbelievers can be justifiably killed.

By the way, simply believing in God doesn’t protect you from the wrath of Allah. If you don’t believe that Muhammad is the Messenger of God, you are, by definition, an unbeliever. You can, under certain circumstances, be legitimately killed or enslaved or raped. Being a fairly new convert, Professor Brown was a tad more honest about these things than an experienced Islamic apologist should be. Nevertheless, he has done us infidels a favor by pulling back the curtain and revealing the dark heart of Islam—that it is a religion made in the image and likeness of Muhammad.

Another glimpse into the reality of Islam was provided last week by Muslim rioters in Stockholm, Sweden. Swedish officials have long tried to cover up the extent of Muslim immigrant crime, and the Western media has been happy to play along with the pretense. So when President Trump made a reference during a speech to what happened “last night in Sweden,” the media was quick to pounce. Nothing of note had happened in Sweden the night before, they gloated: Trump had got it wrong again. His implication that Muslim immigration had led to a surge in violence was baseless. Did Trump not know that Sweden was still the land of harmony, peace, and prosperity—of Pippi Longstocking, ABBA, and Volvos?

And then, the next day, rioting erupted in Rinkeby, a suburb of Stockholm. For over four hours, a mob of seventy, many of them masked, set fire to cars, looted shops, beat passers-by, and threw rocks at police. Nor was this the first time. Sweden has experienced numerous riots. The worst of them lasted almost a week in 2013:

The riots began in the immigrant-dominated suburb of Husby, but quickly spread to other suburbs such as Rinkeby, Tensta, Kista and the town of Södertälje south of Stockholm. Night after night, rioting immigrants left images of broken windows, burnt walls, and scorched car parks. Cars were torched and several schools and a police station were set ablaze.

In addition to rioting and soaring crime rates, Sweden has the second highest incidence of rape in the world. Many of the assaults are committed in crowded public spaces:

This is evident in the increasing mass sexual assaults and rapes committed by migrants at Swedish festivals. In July 2016 at Bravalla, Sweden’s largest music festival, there were nearly 40 assaults, including five rapes. A week earlier at Putte i Parken (Party in the Park), a free festival in Karlstad, there were 32 similar sexual attacks where the youngest victim was just twelve years old.

The establishment wants to keep alive a certain narrative about Muslim migration into Sweden—namely, that the migrants are happily and peacefully integrating into Swedish society. Unfortunately for them and their narrative, reality keeps intruding on the pretty picture they have drawn.

Something similar is happening at Georgetown. The university wants to keep alive the notion that Islam is no different from—and maybe even better than—other world religions. And then someone like Professor Brown lets slip a few home truths about Islam and threatens to spoil the whole narrative.

In response to the riots in Sweden, a few members of the mainstream media were honest enough to report, however briefly, on the violence. Will Georgetown act accordingly in regard to Professor Brown’s defense of Islamic slavery? So far they’ve done essentially nothing. Evidently, university officials are hoping that the fuss will die down and things will return to normal.

But the normal work of the Alwaleed bin Talal Center is to churn out shoddy and tendentious research designed to show that Islam is as normal as apple pie. The main business of the Center is to convince Catholics that “Islamophobia” is the greatest threat to our nation, while deceiving them entirely about the nature and aims of Islam. If Georgetown’s Disneyfied view of Islam prevails, then America will almost certainly suffer the same fate as Europe, where riots and rape are the new normal, and where cathedrals, synagogues, and national monuments must be protected by security forces and bulletproof barriers.

Georgetown University once profited by selling slaves, now it is profiting by allowing the Saudis to purchase influence and spread disinformation. But this is not simply a game of “gotcha”—of catching the MSM in one more lie, or of pointing out the hypocrisy of a prestigious Catholic institution. The stakes are too high. The point of calling attention to Georgetown’s misadventures is not to score points, but to awaken the university to its Catholic calling. And, if that is not possible, to alert other Catholics to the university’s Islamic whitewash operation.

While Georgetown is busy fighting “Islamophobia,” Christians are being enslaved in Africa, and exterminated in the Middle East. What we are witnessing is not a misunderstanding between cultures, but the unfolding of a spiritual war—one with a bloody physical front. Most Christians are hardly aware that the battle has been joined. And some—like those at Georgetown—are naively abetting the wrong side. By its silence over the Islamic slavery issue, Georgetown has taken one more step into the darkness. Other Catholics would be foolish to follow their lead.

This article originally appeared in the February 27, 2017 edition of Crisis.