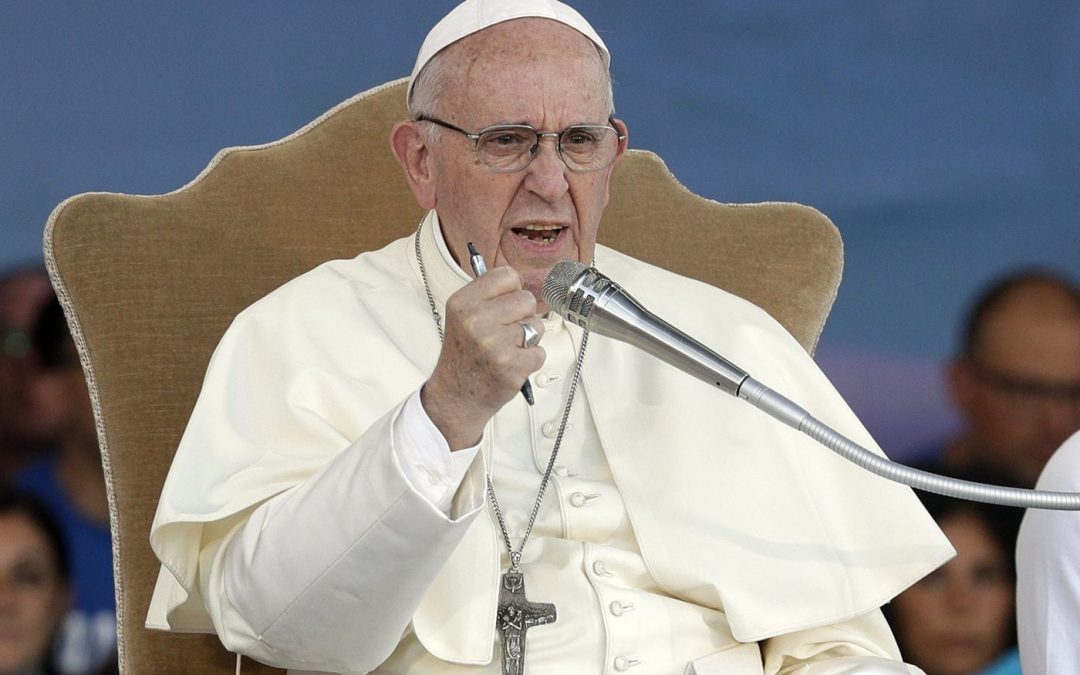 The Pope’s popularity in Italy has dropped from 88 percent in 2013 to 71 percent in 2018. But you’d be mistaken to think that the decline has to do with Archbishop Viganò’s charge that Francis had covered-up for Cardinal McCarrick. The poll was taken before that story broke.

According to the poll’s author, much of the dissatisfaction with the pontiff has to do with his welcoming approach toward migrants. Even before Viganò’s bombshell accusation, Italians were already distancing themselves from the Vatican.

In a sense, the Catholic Church in Italy set itself up for rejection. In the months leading up to the March election, it doubled down on its policy of greater openness to immigrants whether legal or illegal. In a dozen different ways, Church leaders let it be known that refusal to welcome the migrant was, in effect, a rejection of Christ.

Yet voters ignored the Church and voted in large numbers for the anti-immigration parties. And there is no sign that they’ve regretted their choice. According to recent polls, many practicing Catholics prefer the hardline immigration policies of the new Interior Minister, Matteo Salvini, to those of Pope Francis. As an Ipsos poll reveals, support for Salvini doubled in four months among Catholics who attend Mass at least once a week. The director of the Ipsos Research Institute said, “There is a clear difference between a significant part of Catholic opinion and the hierarchy of the Church.”

With good reason. Despite numerous attempts to keep it quiet, it’s no secret anymore that the influx of Muslim migrants into Europe has resulted in a giant crime wave. And the situation in Italy is not nearly as bad as it is in other countries such as Germany, France, Belgium, England, and Sweden. In many parts of Europe, stabbings, rapes, acid attacks, and pitched battles between police and migrant gangs are daily occurrences. One can surmise, therefore, that Italy is not the only country where respect for the Church has fallen sharply.

It’s not only that the Vatican has consistently lobbied for more migrants, but also that it seems unconcerned for the victims that result from increased migration. Indeed, Church leaders have largely failed to acknowledge that there is a problem. Thus, on one occasion, Pope Francis claimed that migrant security is more important than national security, and on another occasion he chided Europeans for opposing immigration because of “threats to our comfort.”

But Europeans know that there is a good deal more to worry about than threats to their comfort. The fact that the pope has never acknowledged their genuine fear for their own safety and that of their children, suggests that he is badly out of touch with the situation.

His inability to comprehend the justifiable fears of ordinary Europeans stems from a more basic lack of comprehension. Francis doesn’t understand their fears because he doesn’t understand Islam. Francis and other Church leaders have demonstrated over and over that they are ill-informed about the Muslim faith. The most egregious example of this ignorance is Pope Francis’s avowal in Evangelii Gaudium that “authentic Islam and a proper reading of the Koran are opposed to every form of violence.”

Anyone with a basic knowledge of Islamic history and scripture could have predicted that the sudden influx of millions of migrants from Islamic countries would result in a wave of crime, violence, and—most predictably—sexual assaults. That knowledge was available to the Church. It could have been found in Church history or in the writings of Church Fathers or Church Doctors (such as St. Thomas Aquinas). In short, the Church was well-positioned to serve as an early warning signal. It could have alerted Catholics and other Europeans to the dangers that have always been inherent in Islam. Instead, Church leaders created a misleading narrative about Islam—one that was based on half-truths and a highly selective sampling of Muslim beliefs. Catholics who read Nostra Aetate, Lumen Gentium, and the Catholic Catechism or who attended Catholic schools came away with the impression that Islam was an upstanding fellow faith which revered Jesus and honored Mary. In short, nothing to worry about.

The Church’s misleading narrative about Islam was a main factor in rendering Europeans unprepared for what would happen once Islam became a significant presence on the continent. It wasn’t the only factor, but it was an important one. Even those who dislike the Church still pay attention to what she says. Unfortunately, Church leaders never bothered to do their homework. They preferred to go along with the fashionable multicultural notion that all religions are essentially the same. Thus, they focused on those elements in Islam that seemed vaguely Catholic—prayer, pilgrimage, fasting, and “honor” for Mary.

Of course, one doesn’t need to look into Church history in order to acquire a more realistic perspective on Islam. These days, all that is necessary is to simply look around. Ordinary Europeans are looking around and they can see that they have been seriously misled both by secular leaders and Church leaders. Recent polls show that a solid majority of Europeans now want a total halt to Muslim migration.

As I have suggested elsewhere, the Church’s cover-up of the full story about Islam is potentially a larger scandal than the cover-up of sex abuse in the Church. This is not to say that it is a more shocking scandal. The moral failings of the abusers and of those who covered-up for them are objectively more serious than the failings of those clerics who thoughtlessly repeat a fashionable narrative about Islam or those who naively believe that Christian duty requires the opening of all borders to all comers.

But the cover-up of Islam’s aggressive nature is a larger scandal in the sense that it will result in many more victims and many more traumatized relatives of victims. The Bataclan theater massacre alone resulted in 130 dead and 413 injured. This means that the number of grieving friends and relatives must have been in the thousands. The Pakistani rape gangs in Rotherham victimized 1,400 teenage girls, and thousands more have fallen victim to Muslim gangs in dozens of other English cities and towns over the last decades. In short, the scale of the suffering is immense and will likely continue to increase.

Catholic bishops have no direct responsibility for any of this, but they bear an indirect responsibility. They lobbied forcefully for open borders, they failed to anticipate the predictable result of the policies they endorsed, and they opposed immigration-control measures that might have protected Europeans from further savagery.

As the situation in Europe worsens, the Church will be seen as one of the accountable parties. Because Church leaders failed to provide due warning about the aggressive nature of Islam, they will be held responsible for a failure to protect. Because they encouraged and facilitated migration from cultures known to be misogynistic, anti-Semitic, and anti-Christian, they will be accused of reckless endangerment or its moral equivalent. For some it will even seem that the Church has taken sides against them.

I’ve indicated that the Church’s upbeat assessment of Islam can be attributed to naiveté or possibly to laziness—the kind of laziness we find in people who simply can’t be bothered to do their research. There is, of course, the darker possibility that some in the Church do fully understand the trouble with Islam, but—for whatever reason—don’t want you to know about it. If this is the case, their guilt is much greater.

Of course, many secular leaders share in the guilt. They propagated similar misleading narratives about Islam. They promised that refugees would enrich the culture, and they assured citizens that the assimilation and integration of Muslim migrants was just around the corner. But as these presidents, prime ministers, and chancellors are replaced with more clear-eyed leaders, the Church may well be left standing as the sole defender of and apologist for Islam. It won’t be an enviable position or a defensible one.

Currently, the most popular leaders in Europe are Christians who want to put a halt to Muslim migration while simultaneously reaffirming the religious roots of European culture. I’m thinking of individuals such as Austrian Chancellor Sebastian Kurz, Hungarian Prime Minister Victor Orban, and Italian Interior Minister Matteo Salvini.

Naturally, they’re not popular with many in the establishment. In July, Famiglia Cristiana, a Catholic weekly magazine, ran a cover photo of Salvini with the caption, “Get behind me Salvini”—an obvious reference to Christ’s words, “Get behind me Satan.” In the eyes of the editors at Famiglia Cristiana, Salvini is doing the devil’s work by attempting to curb illegal immigration. But for a growing number of Italian Catholics, Salvini is a hero who is doing his best to protect the flock whose safety has seemingly become such a low priority in Rome.

The convergence in time of two scandals—one concerning sex abuse and the other concerning the Church’s facilitation of the spread of Islam—suggests that Satan has been far more active in the Vatican and environs than in the Ministry of the Interior.

This article originally appeared in the September 7, 2018 edition of Crisis.