Milley, the Military, and Marxism 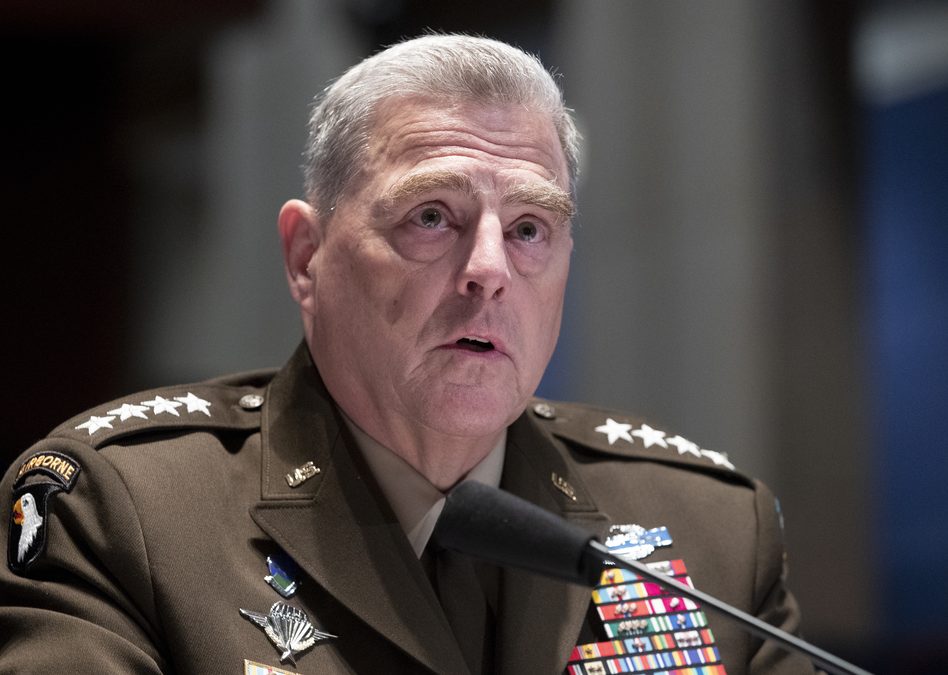 In Dr. Strangelove, one of the finest dark comedies ever filmed, international security is threatened by a right-wing Air Force general who has a paranoid obsession about a “commie” plot to fluoridate the water supply and thus sap Americans of their “precious bodily fluids.”  In response to the perceived threat, General Jack D. Ripper, who commands a Strategic Air Command base, orders a wing of nuclear-armed bombers to attack targets in Russia, thus igniting a nuclear holocaust

The character of Ripper fit the sixties liberal stereotype of a right winger to a “T:” rigid, authoritarian, and paranoid.  But that was sixty years ago. Today all the rigid, authoritarian, paranoid generals, are left-wingers. Unfortunately, they’re not characters in a funny film; they’re living, breathing fanatics who control armies, naval fleets and nuclear arsenals.

Take general Mark Milley, the chairman of the Joint Chiefs of Staff.  Like General Ripper, Milley suffers from paranoid delusions.  Only, he’s not worried about the “commies.”  He’s worried about a coup by right-wing, white supremacists led by Donald Trump.  According to a new book by two Washington Post journalists, Milley has compared Trump to Hitler, and his followers to Nazis— “the same people we fought in World War II.”

“We’re the guys with the guns”? Some may find this comforting, but more reasonable people will not.  It’s eerily reminiscent of President Biden’s recent warning to “domestic extremists” that they’d better behave because they don’t possess F-15s or nuclear weapons, and, by implication, “we do.”

Milley and Biden’s justification for fearing a coup is the claim that the January 6th incursion into the Capitol Building was an attempted coup—an act of insurrection aimed at toppling the government.  Many on the left described the January 6th event as the worst thing to happen in America since 9/11—and maybe worse than that.

But, to put it mildly, that’s a stretch.  If January 6 was intended as a coup, it would have to rank as one of the worst planned coups in history.  For starters, one of the main prerequisites for staging a coup is to carry arms.  But, according to police reports, no weapons were found on the “coup” participants.  Moreover, the “coup” leaders—a motley crew of good old boys, one shaman wearing a Viking hat, and possibly a couple of Antifa plants– seemed to have no plan of action beyond getting into the Capitol Building.  Once inside,they sat in office chairs, took souvenirs and selfies, and gave every impression of being out on a lark.

That’s not to say that no planning was involved.  If one theory is correct, the January 6th incursion was extremely well-planned—but not by the crew without a clue.  According to a series of reports by Tucker Carlson on Fox News, the FBI had plans of its own for turning a Trump rally into a riot.  Carlson presented evidence suggesting that the FBI had planted agent provocateurs among the rally crowd in order to incite a riot.  That theory may seem far-fetched to some, but it makes a lot more sense than the widely-accepted theory that a group of aimless and unarmed Trump supporters were planning to take over the reins of the U.S. government.

In any event, General Milley seems to have coups on his mind.  One suspects, however, that what he fears is not a coup but a counter coup.  It’s no secret that many Americans believe that the Democrat Party engineered a coup by rigging the last election.  And whether or not there was sufficient election fraud to turn the election, the Democrats have been acting ever since in the totalitarian manner of those who want to quickly secure power before their legitimacy can be challenged. Much of their efforts so far have been aimed at creating a one party state—one which will likely morph into a police state.  Milley is aware that a great deal of resentment has built up against the Democrats because of these tactics, and so he fears a coup.

This is not to say that General Milley played an active role in the Democratic Party takeover of the government.  It was enough for the Democrat leadership to know that he and other top military leaders would be on their side.  As Milley himself is reported to have said, “You can’t do this [a coup] without the military.” Would the Democrats have acted so brazenly if they feared an intervention by conservative generals?  But Milley and other like-minded generals and admirals had been giving off signals for a long time that the Democrats had nothing to fear from them.  They were indoctrinating the troops in Marxist -based Critical Race Theory before most people had even heard of it.  They agreed with the Democrats that the greatest threat to our security comes from either a) climate change or b) domestic extremists (i.e. conservatives).  And they reckoned that the best way to increase morale in the Air Force was to introduce drag queen shows.

The only thing that the top brass neglected to do in the midst of all this social engineering was to prepare for war. One can imagine a SNL parody of the situation. Picture the Joint Chiefs of Staff meeting in a bunker beneath the Pentagon to discuss a critical shortage of drag queens, while Chinese missiles rain down from above.

With each passing day, it looks more and more as though the Democrat-corporate-media-academic complex has engineered a coup, or, at least the beginning of one  Yet this possibility is exceedingly difficult for many to entertain.  We tell ourselves that things like that simply don’t happen in America; that this is just politics as usual.  More importantly, the coup of 2021 was a bloodless revolution (if you exclude all the violent riots in cities across the country which led up to it).  Many coups in history have been bloodless, but the common perception is that coups and revolutions are always bloody affairs. So, if Nancy Pelosi doesn’t appear at House sessions with an AK-47 slung over her shoulder, we assume that everything is still okay.

But everything is not okay. The revolution may not be complete, but each new day brings some radical new proposal aimed at obliterating our freedoms and our constitutional order. And the cavalry will not come to the rescue. Our most high-ranking military leaders have the same tear-it-all-down, revolutionary mindset as a Bernie Sanders or an AOC. General Milley is not the exception, he is the rule.

That may be hard to believe, but if you doubt it, I strongly suggest that you read FrontPage Magazine’s multi-article series on “the Disloyal Military.” It’s a disturbing and eye-opening look at how far our military has drifted from its moorings.

It has long been supposed that the Army would always remain a mainstay of support for traditional American values and beliefs. That assumption can no longer be made.