Islam and the Church: Have Islamists Hijacked the Discussion? 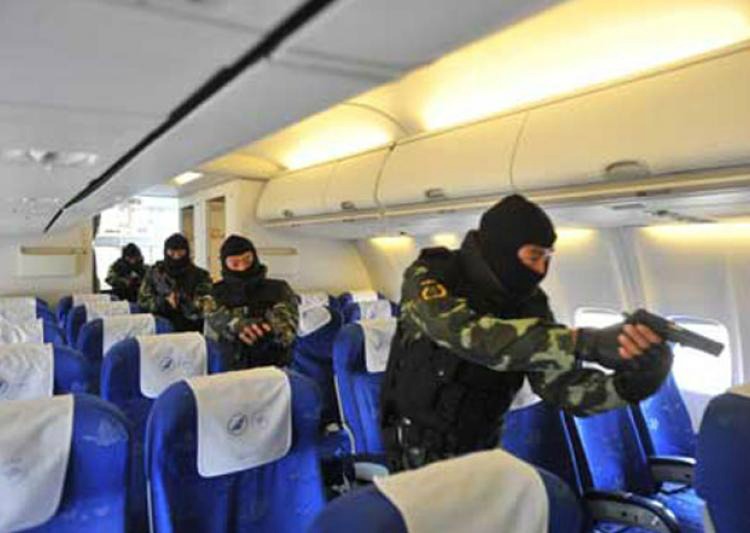 On September 11, 2001, nineteen jihadists hijacked four planes and used them to attack America. Islamists have been using the hijacking strategy ever since. Only nowadays they have bigger targets in mind. Why bother hijacking planes when you can hijack American legislatures, media, schools, and other key institutions?

Perhaps “hijack” is too strong a word. Islamists haven’t actually taken control of these institutions, but they have been able to manipulate them to their own advantage. For example, the lure of Saudi money has turned many American universities into staunch advocates for Islam. Meanwhile, Islamists have conducted highly successful influence operations on the Pentagon (see Major Stephen Coughlin’s Catastrophic Failure), the Department of Homeland Security (see Philip Haney’s See Something, Say Nothing), and the State Department (see the look on John Kerry’s face when he dimly realizes he’s been had by his Iranian counterparts).

If Islamists can manipulate Homeland Security, the Defense Department, and State, could they do the same to the Church? It’s not unthinkable. After all, Soviet KGB agents were highly effective in infiltrating the Russian Orthodox Church during the Cold War era. Closer to home, Saul Alinsky and associates successfully manipulated liberal Catholic prelates in order to further their own leftist agenda in the sixties and seventies.

I used to think that the Catholic Church leadership would come to its senses about Islam long before secular officialdom woke up. That’s because the Church possesses historical, spiritual, and theological insights that should allow it to look beyond the “religion of peace” propaganda and see clearly into the essence of Islam. Besides, I reasoned, the Vatican is located in the heart of Europe: Church leaders would soon see the destructive impact of Islam all around them, and make the needed course correction.

But the course correction hasn’t come. What I didn’t understand was that the stealth jihad campaign for “hijacking” the Church was much further advanced than I guessed. Nor had I realized just how thoroughly many bishops had been marinated in politically correct attitudes. Such attitudes dictated that they look upon Islam as just another friendly Abrahamic faith tradition. Political correctness also ensured that the bishops would be more eager to display their tolerance than to display any curiosity about the discrepancy between what Muslim apologists were saying about Islam and what the facts were saying.

Of course, it would be grossly inaccurate to say that Islamists have hijacked the entire Church bureaucracy, or that they’re calling the shots on Amoris Laetitia or the appointment of cardinals. But it does seem fair to say that they have hijacked the Church’s ability to discuss Islam in a critical manner. For example, it seems no exaggeration to say that the dialogue process has been co-opted by Muslims. That’s the gist of an article by attorney and writer Timothy Lusch in the New Oxford Review. In “Dawah, Dislocation and the Hijacking of Catholic-Muslim Dialogue,” Lusch suggests that the USCCB’s Muslim partners are using the dialogue process to “undermine” the Church.

Who are the bishops’ dialogue partners? The two main organizations are the Islamic Society of North America (ISNA) and the Islamic Circle of North America (ICNA). Both groups, says Lusch, have “ties to Hamas, the Muslim Brotherhood, and Jamaat-e-Islami.” And both groups were listed as unindicted co-conspirators in a major terrorist funding case.

It might be expected that the dubious associations of ISNA and ICNA would put the bishops on their guard. But this was not the case. Whatever the original intent of the dialogue, “the priority of the talks,” writes Lusch, “has shifted from theological discussion (two-way ‘dialogue’) to advocacy in support of the Muslim community.” Thus, Anthony Cirelli, associate director of the USCCB’s Secretariat for Ecumenical and Interreligious Affairs, told Catholic News Service that “there is an urgency to engage more in a kind of advocacy and policy in support of the Muslim community.” He added that U.S. bishops are “coming to stand with our Muslim colleagues … in trying to change the negative narrative surrounding Muslims in our popular media.” Meanwhile, Blase Cardinal Cupich, the co-chairman of the national dialogue, expanded on the narrative narrative by saying that Christians and Muslims must try “to replace narratives of hate and distrust with love and affection.”

Which means that the bishops probably have no intention of getting to the bottom of the growing Muslim genocide against Christians. That might betray distrust on their part. Most likely they will devote their energies, as they have in the recent past, to proving their “love and affection” for their Muslim dialogue partners.

How can they do that? According to Anthony Cirelli, “the bishops’ priority at the moment is to listen to [Muslims’] concerns, their fears, their needs…” Well, if you believe ISNA, ICNA, and CAIR, a Muslim greatest fear is “Islamophobia.” So, if Christian really love their Muslim neighbors, they will join in the battle against “Islamophobia.” As anyone who follows these matters knows, the bishops have done this with a will. In fact, they have made the battle against “Islamophobia” one of their chief priorities. As Bishop Robert Mc Elroy said at the event which kicked off the latest round of dialogue, Catholics need to take an active role in fighting “the scourge of anti-Islamic prejudice.”

The trouble is, as I’ve pointed out elsewhere, there’s not much evidence for the existence of this “scourge.” It turns out that many of the “hate crimes” against Muslims are manufactured by Muslims. In other words, the case for the rise of “anti-Islamic prejudice” relies heavily on fake news. Nevertheless, the bishops seem more interested in protecting Muslims from imaginary crimes than in protecting Christians from real crimes.

This is quite calculated on the part of Muslim activists. They know that the Catholic Church can have a powerful influence on public opinion, and so they have manipulated the bishops into using their influence to serve an Islamist agenda. The Islamophobia campaign is intended to deflect attention away from the victims of Islam by portraying Islam itself as a victim of prejudice. The campaign is further intended to silence criticism of Islam. It’s a way of ensuring that awkward topics won’t be raised—awkward topics such as persecution of Christians, apostasy and blasphemy laws, honor violence, forced marriage, child marriage, female genital mutilation, cruel and unusual sharia punishment, and other forms of human rights abuse.

In a sense, the bishops are being asked to observe Islam’s blasphemy laws—and this includes the Bishop of Rome. Sheik Ahmed al-Tayeb, the Grand Imam of al-Azhar University, made it known to Pope Francis that dialogue with the Vatican could be resumed only as long as a “red line” was not crossed. The red line was any criticism of Islam. The dialogue was terminated in the first place because Pope Benedict crossed the line by asking for greater protection of Christians in Egypt following a church bombing in Alexandria.

The bishops’ tacit agreement not to criticize Islam seems to have had a ripple effect on other Church-related institutions. For example, Catholic media are as a rule quite careful not to cross the “red line.” Thus, a recent Catholic News Agency piece on an increase in anti-Semitism manages to avoid any mention of Islam or Muslims. The section on anti-Semitism in Europe does contain a brief mention of ISIS but, of course, as everyone is expected to understand, ISIS has nothing to do with Islam. The fact that the increase in European anti-Semitism coincides with an influx of Muslims from the most anti-Semitic regions on earth doesn’t seem to have stirred CNA’s curiosity. Except for the one-sentence mention of ISIS, the rest of the four-page piece is devoted to making the case that increased anti-Semitism in the U.S. is totally due to white nationalists and the election of Trump. But, according to a recent report, the “hotbed of anti-Semitism” in the U.S. is college campuses—places where white nationalists and Trump supporters tend to be in short supply. On the other hand, just about every major U.S. campus has a chapter of Students for Justice in Palestine—a virulently anti-Semitic group. But to make any connection between Muslims and anti-Semitism would quickly brand you as an “Islamophobe”–which, nowadays, is a far more serious charge than anti-Semitism. And so CNA, along with most of the secular media, maintains a respectful silence. If you relied on CNA for your understanding of anti-Semitism, you would gain the impression that it has everything to do with Trump and nothing to do with Islam.

The bishops’ solidarity-with-Islam policy seems also to have seeped over into Catholic schools and colleges. For example, the Diocese of Orlando recently reprimanded a sixth-grade teacher for showing “disrespect” to Islam. His crime? He gave his students a handout containing St. John Bosco’s unflattering assessment of Islam. Meanwhile, Catholic students at Boston College celebrate “International Hijab Day” in order to show their solidarity with Islam, and at Georgetown’s Prince Alwaleed bin Talal Center for Muslim-Christian Understanding, the main focus is on battling—you guessed it—“Islamophobia.” Another stalwart foe of “Islamophobia” is Saint Louis University, which has just been named by the David Horowitz Freedom Center as one of the “top 10 college administrations most friendly to terrorists” for its welcoming attitude toward terrorist-supporting groups and speakers.

Catholic public policy organizations are also doing their best to make the world safe from the “scourge of anti-Islamic prejudice.” According to an article in World Net Daily, a bill supporting American law for American courts was defeated in the Michigan Legislature when two powerful lobby groups—the Council on American-Islamic Relations (CAIR) and the Michigan Catholic Conference—teamed up to defeat it. The 2012 bill was intended to prevent the introduction of sharia law into Michigan. The Catholic opposition to it suggests that some Catholics are now prepared to advocate for Islam on any issue—up to and including support for the anti-Constitutional and often cruel provisions of sharia law.

In the wake of the Michigan FGM scandal, a similar anti-sharia bill was introduced last month. Will the Michigan Catholic Conference once again come down on the side of Islamic law? The World Net Daily piece doesn’t venture an opinion on that, but it does predict that the Catholic Church in Michigan will support the candidacy for governor of Abdul El-Sayed, who is described as “a devout shariah-complaint guy.” If elected, El-Sayed, who has been compared to Barack Obama, would become the first Muslim governor in America…but probably not the last if America’s Catholic leadership doesn’t wake up to the ways in which they are being manipulated by their Muslim counterparts.

In his influential book, The Quranic Concept of War, Pakistani General S. K. Malik argued that the proper preparation for war is to first “dislocate” the faith of the target population. “Dislocated” is a pretty good description of what’s happened to many bishops and other Catholic leaders. They’ve been diverted from their primary teaching mission and shunted off onto a siding labelled “fight Islamophobia” There they sit, repeating the narratives that Islamists have put in their mouths, and joining in Islam’s fight for better PR. Meanwhile, while they sit sidetracked, the engine of Islamization is barreling down the main line.

This article originally appeared in the June 14, 2017 edition of Catholic World Report.