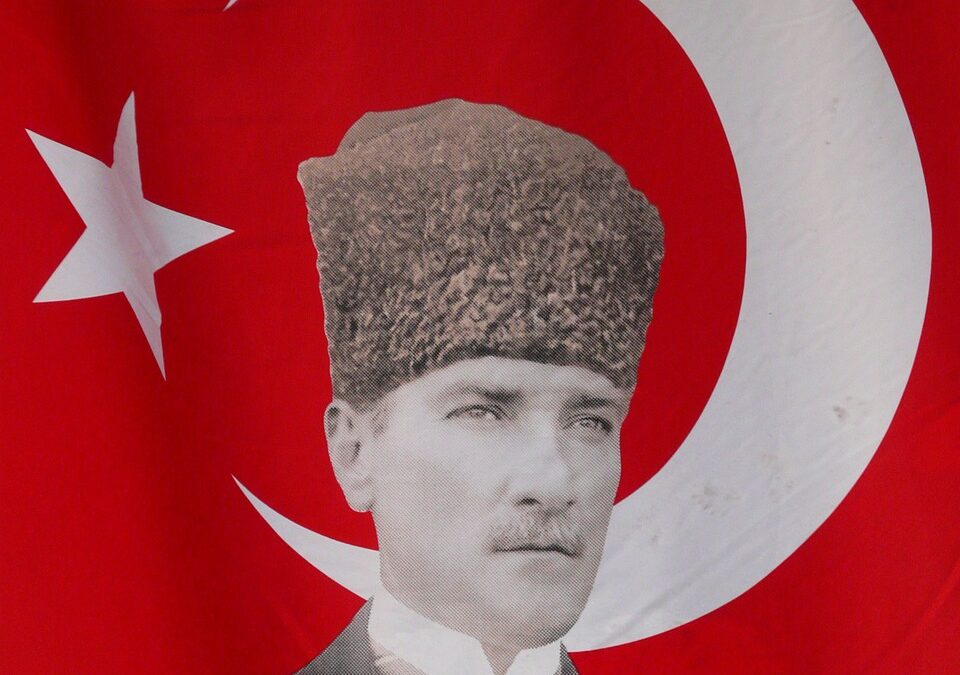 “Deeply-held” beliefs are not always as deeply-rooted as they seem.

“Is Islam too big to fail?”  I raised that question ten years ago in Christianity, Islam, and Atheism.  I pointed out that, like Islam, Soviet communism once had an air of inevitability about it. Like Islam, it seemed too big to fail, yet the Soviet Union did fail; and it collapsed more quickly than anyone had anticipated.

Is it possible that, like Soviet communism, Islam may prove to be more fragile than it now appears?  The hope that Islam would fail has been expressed in various ways throughout history—by kings, popes, and Christian saints.  Even Winston Churchill looked forward (in 1899) to a future in which “the faith of Islam has ceased to be a great power among men.”

One could argue here that whereas Soviet communism was a political belief, Islam is a religious belief and hence, more impervious to change.  If Islam hasn’t failed, it’s because faith in Islam is too deeply rooted.

At first glance that seems like a solid argument.  But it doesn’t hold up to examination.  “Deeply” held beliefs are not always as deeply rooted as they seem.

For example, forty years ago, the Catholic faith in Ireland was, to all appearances, a deeply-rooted faith.  Ireland was considered to be one of the most Catholic nations on the face of the earth.  Since then, however, Ireland has experienced a marked loss of faith.  Church attendance has dropped precipitously and Irish citizen have voted in favor of same-sex marriage and abortion.  Perhaps, the Catholic faith was not as deeply rooted in Ireland as once thought.  Or, perhaps, even deeply-rooted beliefs are susceptible to change.

Another example? Prior to the Supreme Court ruling in 1972, the vast majority of American Christians were opposed to legalizing abortion, but within a relatively short time after Roe v Wade, nearly 50 percent of Christians favored keeping abortion legal.

Still, for another decade or so, most Americans held on to the “deeply held” belief that same-sex marriage was contrary to Christian teaching. In 1988 a University of Chicago poll found that only 11 percent of Americans supported same-sex marriage, with 68 percent opposing it. Now, however, the numbers tell a different story. A 2020 poll by the Public Religion Research Institute (PRRI) found that about 70 percent of Americans supported same-sex marriage while only 28 percent said they opposed it. Those who supported marriage equity included 79 % of white mainline protestants, 78 % of Hispanic Catholics, and 68 % of white Catholics. In other words, a majority of Christians now have no problem with what was long considered to be a radical departure from Christian teaching.

Deeply held beliefs, in short, are more malleable than we like to admit.  How malleable?  Now that the “Age of Woke” is upon us we’re beginning to find out.

Most Americans, one assumes, still believe in the biological fact that boys can’t become girls and girls can’t become boys; yet, an increasing number seem willing to say the opposite when called upon to do so.  Even conservative radio and TV hosts seem compelled to refer to Bruce Jenner as “she.” In other words, many of our deeply held beliefs crumple when challenged.

But Islam, you may say, is a different kettle of fish:  Islam really is a deeply-rooted faith.  Because Islam is etched into the hearts of Muslims, it’s hopeless to hope that Islam will ever fail. Or so it is widely assumed.

Except that Islam once did fail—or, at least, it came very close to doing so.

About twenty years after Churchill expressed his wish for a future in which “the faith of Islam has ceased to be a great power,” Islam did cease to be a great power.  With the fall of the Ottoman Empire in 1922, the Muslim world began a process of secularization that led it away from original Islam—the faith founded by Muhammad in the seventh century—and closer to Western mores and values.

The tone was set by Mustafa Kemal Ataturk who abolished the Caliphate in 1924, declared Turkey a secular state, and forced Muslims to dress like New Yorkers.

The Shah of Iran followed suit, and began a program of Westernization and secularization which included a number of enlightened social reforms.  His son carried on the new tradition, and did his best to introduce Iranians to American movies and music as well.

The rest of the Middle East quickly accepted the new, more relaxed form of Islam. Militant Islam had become “Islam Lite.”  For example, as far as movie audiences in America could see, the big news out of Egypt in the early fifties had nothing to do with the expansion of Islam, but everything to do with the expansion of King Farouk’s waistline.  Movie newsreels regularly carried reports of the playboy king’s romantic and culinary exploits (he is said to have consumed 800 oysters a week), and his acquisition of cars, yachts, mansions, and mistresses.

Average Egyptians were not, of course, quite so extravagant, but many seemed to have concluded that the future lay more in Westernization than in Islamization.  Photos of graduating classes at the University of Cairo in the fifties reveal that young Egyptian men and women dressed more or less like their counterparts at the University of Chicago—with not a hijab in sight.

By the sixties and seventies, it was plain that the Islamic faith was not nearly so deeply held as it once was. And some were not at all happy with this departure from the path laid out by Allah in the Koran.  In fact, the Muslim Brotherhood had been founded in Egypt in the 1920’s to combat the secularization of the Muslim world that was emanating from Ataturk’s Turkey.

However, the counter-revolution that the Muslim Brotherhood and other Islamic groups sought was slow in coming.  It didn’t arrive until 1979.  And it didn’t begin in Egypt. It began in Iran. The Iranian Revolution of 1979 seemed like a revolution to Middle-Easterners, but it was actually a restoration of original Islam to its proper place.  As presented by Muhammad, Islam was both the supreme religion and the supreme rule of life. Every aspect of life should be subordinated to it.  One of the most visible symbols of this submission was the hijab and one of the first requirements of the revolutionary Iranian government was to make the wearing of the hijab mandatory.

The effects of the Iranian Revolution quickly spread throughout the Middle East.  The climate of the times is captured by former BBC reporter Kim Ghattas in her 2020 book Black Wave.  The “black wave” to which she refers was the hasty adoption of dark hijabs, chadors, and abayas that swept through the Middle-East following the revolution in Iran.  Along with the dark clothing came an “intellectual and cultural darkness” as café’s, bookshops, and theaters were closed down.

So, in much of the Muslim world, the old, restrictive Islam is once again in control.  After suffering through a long but temporary dilution of the faith, original Islam has reasserted itself.  And this time it looks permanent.

But once again we must raise the question of deep-rootedness.  Just how deeply-rooted can a forty-year-old religious revival be?

A more pertinent question is this:  Are we mistaking lip-service for deeply-held beliefs?  Do some or many Muslims pretend to have feelings or beliefs that they don’t in fact have?  And, if so, what would be their motive?

In the case of Islam, there is a very clear motive for professing a stronger faith than one actually has.  The motive is provided by the apostasy laws which stipulate that the penalty for leaving Islam is death (for a man) or imprisonment (for a woman).

Generally, the penalty is only enforced by the authorities in cases of public apostasy. Unfortunately, the penalty can also be enforced by neighbors, friends, and relatives. So, the mere fact that the law exists provides an incentive to put on a show of religion even if one disbelieves or only half-believes.

Moreover, a puritanical religion, such as Islam, breeds a puritanical spirit in some.  And that means that every neighborhood will contain self-appointed guardians of the faith who keep an eye out for religious laxity and who are quick to inform religious authorities if they spot it.

One does not want to arouse the suspicions of such people, and so one keeps his reservations about religion to himself.  This shouldn’t be difficult to understand.  Our current woke “leaders” are a puritanical bunch who demand absolute conformity to their extremist beliefs.  You may not believe what they believe, but you may feel a strong pressure to give lip service to their beliefs lest you suffer social ostracism, or loss of employment.

Islam may appear to be a deeply held faith, but what gives it that appearance is not so much love of God and neighbor but fear of death or imprisonment.  Sheik Yusuf al-Qaradawi, one of the most respected leaders in the Muslim world, once said, “If they [Muslims] had gotten rid of the punishment for apostasy, Islam would not exist today.” He said this not to criticize Islam, but to illustrate the effectiveness of its laws.

To a large extent, Islam is a faith based on fear, and once that fear disappears, the faith is often revealed to be no more than skin deep.  Once the apostasy penalties were abolished or no longer enforced, Muslims felt freer to be less observant. During the period of secularization, the Muslim world did indeed become more moderate, but it became more moderate because it was moving away from Islam, not toward it.

Islam never died out in the Middle East, but it was forced to make accommodations with the secular world in order to stay alive.

We have been told that the Iranian Revolution changed all that.  But did it?  It would be a mistake to think that the diverse and vibrant Iran that Kim Ghattas mourns can never return.  Many Iranians remember that more liberated era and as a result they have a standard against which to measure the new regime. And the regime of the mullahs does not measure up.

Perhaps the Ayatollah Khomeini tried to slam the engine of Iranian society too quickly into reverse, but whatever the reason, there are indications that Khomeini and the clerical leaders who succeeded him failed to win the hearts and minds of the people.

Iran has one of the world’s highest suicide rates, a very serious addiction problem, and a low birth rate. And Iranians are not looking to Islam to solve these problems. In 2020, the Group for Analyzing and Measuring Attitudes in Iran (GAMMAN) conducted an online survey of almost 40,000 Iranians living in Iran.  The results of the survey showed “a deeply felt disillusionment with institutional religion.”

Only 40 % of the respondents identified as Muslim.  Nine percent said they were atheists, 7 % called themselves “spiritual,” 8 % said they were Zoroastrians, and 6 % identified as agnostics.  The rest identified as Humanists, Christians, Baha’i, Jewish, and “others.”  Other questions revealed that only 37 % of the sample believed in life after death, and 47 % reported losing their religion in their lifetime.

So, 40 years after the Iranian Revolution, and judging by the survey sample, a majority of Iranians do not have a deeply-rooted belief in Islam. What they have instead is a deep sense of disillusionment.

In other words, there’s still plenty of room for Churchill’s wish about Islam to be realized.

This article originally appeared in the April 18, 2022 edition of FrontPage.