Hitler and the Grand Mufti 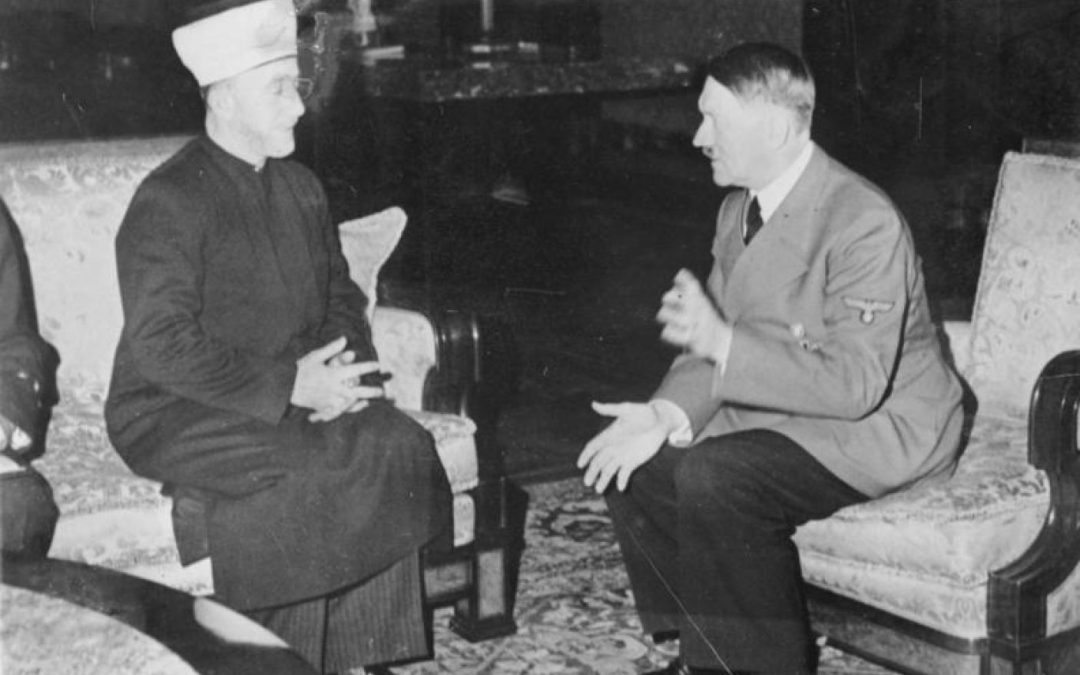 One of the great advantages we have over our ancestors is hindsight. With a clearer picture of the past, we can avoid making the same mistakes they made. But what if we’re not allowed to use our hindsight? What if we’re forced to pretend that what happened in the past bears no relation to what is happening now?

Of course, there’s something to be said for learning from your own mistakes, but some mistakes are so costly that it’s far better to learn about them in history books. The appeasement of the Nazis prior to World War II is an example of the kind of mistake the world can’t afford to repeat. Yet there’s much to suggest that we are engaged in a similar folly today. The rise of Islamism in Europe, Africa, the Middle East, and elsewhere is eerily reminiscent of the rise of Nazism in Europe eighty years ago. By now, anyone with a passing acquaintance with history should have had that hmm-this-rings-a-bell moment. Thanks to our exquisitely sensitive educational system, however, the ranks of those who “don’t know much about history” has swollen to vast proportions. And even those who do know their history know that there are certain comparisons you are not supposed to make—like the one that obtains between Nazis and Islamists. To do so would be offensive to Muslims and to all sorts of other people as well. In other words, it’s not permissible to have the kind of discussion that might help us to avoid the fate suffered by Europe under the Nazis.

As a general rule, it’s best to avoid the Nazi analogy. Nazism represents a uniquely evil moment in history. Labeling every politician you disagree with as a Nazi only serves to dilute the singular horror of the original. Yet in the case of Islamists, the analogy is appropriate. The similarities between the two ideologies are too close to ignore. Moreover, as a point of historical fact, prominent Islamists worked closely with the Nazis during the Second World War. What’s more, even today many Muslims make no secret of their admiration for Hitler. It may be a stretch to call Senator so-and-so a Nazi for employing dirty campaign tricks, but it’s less of a reach to notice a Nazi resemblance when Islamists are so willing to paste a Charlie Chaplin mustache on their upper lip—when, for example, an upscale Turkish mall features posters of Hitler as part of the décor, or when Muslim mobs in Paris attack a synagogue full of Jews, or when prominent imams express a desire to bat cleanup for Hitler.

Finish Hitler’s work? Islamic theologian and scholar Yusuf al-Qaradawi has voiced just such a wish. In a 2009 statement, he called the Holocaust “a divine punishment” of Jews: “The last punishment was carried out by Hitler… Allah willing, the next time will be at the hand of the believers.” Of course, Sheik Qaradawi does not represent the views of all Muslims on the matter. On the other hand, it would not be accurate to say he is out of the mainstream. Qaradawi has held numerous high academic positions in various Middle-Eastern universities; he is chairman of the International Union of Muslim Scholars; he has received eight international prizes for his contributions to Islamic scholarship; and he finished third in a 2008 poll to determine the world’s leading public intellectual. Qaradawi also plays well with the non-scholarly crowd. His popular “Shariah and Life” TV program reaches an estimated worldwide audience of sixty million. In many respects Sheik Qaradawi is Mister Mainstream.

Qaradawi is a relative latecomer to the Hitler fan club, and not even the most prominent. While the Sheik is limited to reaching across the years to congratulate the Führer, Haj Amin al-Husseini, the Grand Mufti of Jerusalem, had only to reach across the table. There is a photo of Hitler and Husseini seated knee-to-knee in Hitler’s private office in the Reich Chancellery in November, 1941. The probable topic of conversation?—the quickest way to eliminate the Jews. Speeding up the “Final Solution” was an obsession with Husseini, and he spent hours discussing the matter with the likes of Joachin von Ribbentrop, Heinrich Himmler, and Adolf Eichmann.

The Mufti was no maverick Muslim. According to historians David Dalin and John Rothmann, “With the possible exception of King Ibn Saud of Saudi Arabia, al-Husseini was the most eminent and influential Islamic leader in the Middle East.” (Icon of Evil, p. 5) And he was treated as such by the Nazis, who provided him with five residences and a monthly stipend of over $10,000. In return, al-Husseini recruited more than 100,000 Muslims to fight in the European division of the Waffen-SS.

Hasan al-Banna, the founder of the Muslim Brotherhood and a friend of Husseini, was also impressed with the Nazis, and during the war he worked to establish a formal alliance with Hitler and Mussolini. Moreover, under directions from al-Banna, the Brotherhood Intelligence Service shared information with the Germans on the movements of the British Army.

Islamists and Nazis also shared an interest in anti-Semitic literature. According to Dalin and Rothmann:

Like the Nazis, the Arabs also shared a firm belief in the authenticity of the viciously anti-Semitic tract The Protocols of the Elders of Zion. The first of many Arabic editions was published in 1921. It has been a best-seller in Islamic capitals ever since and remains required reading in many Arab universities. King Faisal was so enamored of the book that he ordered all Saudi hotels to put a copy in every room—presumably right alongside the Gideon Koran.

Unfortunately, the Muslim-Nazi connection is not just of historical interest. Islamists all over the world are acting more and more like Nazis.

The anti-Semitism is the most obvious similarity: the firebombing of a synagogue in a Paris suburb, Muslim rallygoers in Antwerp calling for the “slaughter of the Jews,” Islamist protesters in Frankfurt joining with leftists and Neo-Nazis to chant anti-Jewish slogans, and Jews once again leaving Europe in droves in search of safe havens.

Another shared goal is the subjection of Christians. The Jews were not the only targets of the Nazis, they also waged a kulturkampf against Christians. The Catholic Church, in particular, was considered an ideological enemy. Some of this anti-Christian animus is captured in a popular Hitler Youth song:

We are the happy Hitler Youth;
We have no need for Christian virtue;
For Adolf Hitler is our intercessor
And our redeemer (cited in Liberal Fascism, p. 365)

As is becoming increasingly obvious, Islamists are no friends of Christians either. Christians have been the main target of Boko Haram in Nigeria and of the Muslim Brotherhood in Egypt, and Christians were singled out in the Nairobi mall massacre. In Iraq, which has already lost two-thirds of its Christian population in recent years, Christians in the north have been notified by the Islamic State organization (formerly ISIS) that they must either convert to Islam, pay the jizya tax, or face death. In preparation for the anti-Christian campaign, IS soldiers marked Christian homes with identifying symbols.

There are numerous other parallels with the Nazis: the grade-school indoctrination of Palestinian children, for instance, and the use of street violence in European cities as a form of intimidation. However, the most chilling similarity between the rise of Nazism and the rise of Islamism lies in the similar response of those threatened. In both instances, Western nations have fallen all over themselves in offering up gestures of abasement and appeasement. We remember the territorial appeasement of the Nazis—the Munich agreement and the smaller concessions that led up to it—but there was a great deal of cultural appeasement as well. For example, Charlie Chaplin was unable to find a Hollywood producer willing to back The Great Dictator, his 1940 spoof of Hitler. And, while the film was still in production, the British government announced it would prohibit its exhibition in the United Kingdom. Nowadays, filmmakers have no inhibitions about bashing Hitler, but they scrupulously avoid offending the sensibilities of Muslims. For example, Hollywood produces plenty of terrorist flicks but, strangely, their terrorists are never of the Islamic variety. Meanwhile, in obeisance to Islamic pressure, a low-budget filmmaker in California was put in federal prison for a year for making a video that spoofed Muhammad.

Educators and petty bureaucrats have been equally accommodating of Muslim wishes. According to a Guardian headline, “Fear of Islamophobia gave activists free rein in Birmingham schools.” Which activists might that be? The story continues:

A group of fundamentalist ‘activists,’ mostly men of Pakistani origin, infiltrated the management of at least 10 schools in Birmingham, sometimes breaking the law in order to introduce Muslim worship and sex segregation…

The effort to turn the schools into madrassas had gone on for years, but no one tried to stop it. Why? Because “their activities were unimpeded by [city] council officials who were fearful of allegations of Islamophobia.”

That’s Birmingham, England, but who’s to say it couldn’t happen in Birmingham, Alabama? For U.S. educators, Islamophobia ranks right behind racism and homophobia as one of the worst imaginable hate crimes. American school books have already undergone text-change operations in order to make them acceptable to the Islamist education lobby.

But who needs to go to school in order to learn the right attitudes when the media is so willing to assure us that bad things have nothing to do with Islam? Or to reliably echo the Palestinian interpretation of the Mid-East situation? Goebbels was no slouch at propaganda, but he would have envied the ability of Islamists to package themselves as misunderstood nice guys and their skill at getting the world’s media to go along with the ruse.

The West was eventually able to rise up and meet the Nazi challenge. Today the West has yet to arrive at the stage of realizing that it has a challenge on its hands. What we now call “political correctness” existed in incipient form even in the 1930s, but not to the extent that it prevented people from noticing what was right in front of their eyes. That was their advantage over us. Our advantage over them is that we have the benefit of clear and instructive historical parallels. We have the power of hindsight—if only we would allow ourselves to use it.

This article originally appeared in the July 30, 2014 edition of Crisis under the title, “If it Looks Like a Duck: The Islamist-Nazi Connection.”