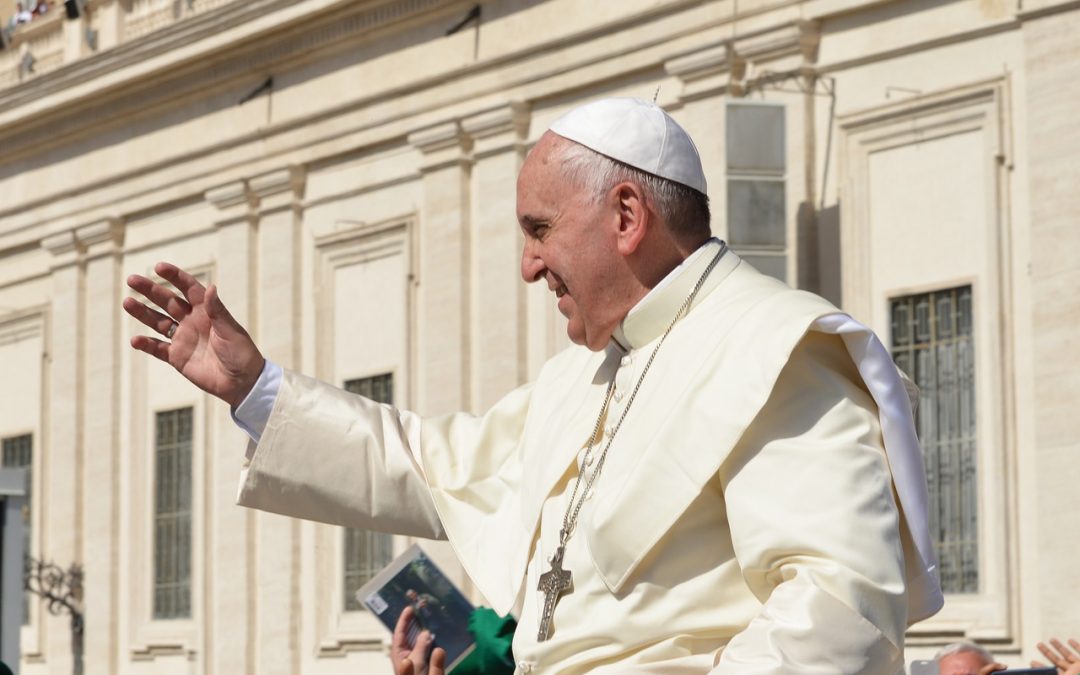 It’s a headline you’re unlikely to ever see.  The climate may change, but Pope Francis’s opposition to fossil fuel is set in, well, anthracite.

But suppose for a moment that Francis actually had made such an appointment.  How would defenders of the pontiff respond to such an inappropriate appointment— “inappropriate,” that is, from the standpoint of one who believes that man-made global warming is a capital sin.

Well, most probably, Francis’s defenders would say that the pope had been poorly advised.  Perhaps it will be rumored about that some in the pope’s inner circle of advisors held stock in Amalgamated Coal Mines and were hoping to line their pockets.

Oh, well, the pope can’t be expected to keep track of every CEO in the world, or to ponder at length every piece of advice his advisors give him.  He may have been a bit naïve, some will admit, but it certainly won’t happen again.

But, suppose it does happen again?  Suppose Francis’s next move is to appoint the Chief Executive of Texas Chain Saw Lumber Limited to head the Vatican Commission on Saving the Rainforest?  And before you’ve had a chance to chew on that, suppose you read that Francis has just put the head of Leaky Oil Tankers Incorporated in charge of the Pontifical Council on Clean Water?

Well, you get the picture.  After a while, it would become clear that whatever the pope might say about saving the environment, it is not high on his list of priorities.

But are they?  Let’s take a short walk down incongruity lane.  Take the John Paul II Pontifical Institute for Studies on Marriage and the Family.  In 2017 Pope Francis “updated” the Institute, gave it a new name, a new direction, and a new chancellor—Archbishop Vincenzo Paglia.  Paglia is best known for commissioning a billboard size homoerotic mural on one wall of his cathedral Church.  Among the many naked figures on the mural, one can spot Paglia himself embracing another man.  If that’s the kind of art he features on the walls of his church, one wonders what he keeps in his private collection.

So, at a time of great confusion about sexual morality, the man that Francis picks to instruct Catholics about marriage and family is a connoisseur of homoerotic art.

Fortunately, the Catholic Church has other institutions on family life which might be expected to provide some balance.  For instance, in 2016, Francis created the Dicastery for the Laity, Family and Life.  Part of its mission is “the pastoral care of the family.”  Who did Francis put in charge?  Bishop (now Cardinal) Kevin Farrell.  Although Farrell recently defended the Holy See’s ban on blessing gay unions, his overall record suggests that he is pro-LGBT.  He wrote a positive blurb for a book by decidedly pro-gay Fr. James Martin, and he invited Martin to be a featured speaker at the 2018 World Meeting of Families in Dublin.  More problematically, Farrell is a protégé of the notorious Cardinal Theodore McCarrick, and shared an apartment with McCarrick for six years.  Yet he denied any knowledge of sex-abuse accusations against McCarrick.

Most recently, Pope Francis appointed Farrell as papal Camerlengo—a position which puts him in charge of the administration of the Holy See in the event of the Pope’s death.  The appointment also means that Farrell will have considerable influence on the next papal election.  Michael Hichborn of the Lepanto Institute commented on the appointment this way:

Someone this close to the homosexual cabal that is rumored to have been the cause of Pope Benedict’s resignation doesn’t belong anywhere near the position of Camerlengo, let alone even in the Curia.

Another name that frequently appears on the list of plum papal appointments is that of Cardinal Joseph Tobin.  Tobin was made a Cardinal in 2016, then appointed as Archbishop of Newark, then appointed to the Congregation for Catholic Education in 2019, and most recently to the powerful Congregation of Bishops.  Tobin was considered to be the likely choice for Archbishop of Washington D.C. where he would have replaced pro-LGBT Cardinal Donald Wuerl who had replaced Cardinal Mc Carrick.  But when complaints were raised about Tobin’s pro-LGBT stance, he was passed over in favor of pro-LGBT Cardinal Wilton Gregory who, because he is black was (I am guessing here) presumably considered more immune to criticism.  There is no guessing, however, about Tobin’s strong backing for the LGBT movement.  He has been widely hailed by the press as a friend and ally of the LGBT community.  Not unexpectedly, Tobin, along with Bishop Farrell, has endorsed Father Martin’s controversial book, Building Bridges.

Martin’s work has also been affirmed by pro-LGBT Cardinal Blasé Cupich of Chicago who praised Fr. Martin as the “foremost evangelizer” of youth in the Church today.  Cupich has been appointed to just about every Vatican committee and congregation in existence.  But let’s focus on just one.

In 2018 Cupich was appointed by Pope Francis to the small organizing committee for the much-anticipated 2019 clerical sex abuse summit in Rome (also known as the “protection of minors summit”). Months prior to the summit, theologian Thomas Weinandy observed:

If they actually take up the major problem in the Church, that of active homosexuality among the clergy and bishops, then you know they’re serious.  But if they hide behind clericalism, you know they’re not serious.

And sure enough, as Weinandy feared, the whole focus of the meeting was on “clericalism” (whatever that means.)  Cupich, who quickly emerged as the man in charge, steered the meeting in that direction and away from the subject of clerical homosexuality.

The choice of Cupich to lead a meeting on clergy sex abuse was particularly ironic because he himself has been accused at several points in his career and in several different dioceses of covering up instances of clerical sex abuse.

I could go on with the list—it’s a long one—but the pattern is clear enough.  Francis’s appointments to sensitive positions in the area of family, marriage, and sexuality are the moral equivalent of appointing the CEO of Texas Chain Saw Lumber Limited to lead a Vatican commission on saving the rainforest.

As I’ve argued above, the human environment of home, family, and church is much more important to social and spiritual development than the physical environment.  As has often been noted, the family is the basis of society, and numerous studies confirm that children from intact families fare better in life than children from broken homes, particularly from father-absent homes.

The notion that society should affirm same-sex marriage, transgenderism etc. is entirely novel and untested.  Moreover, there is ample evidence that people on the LGBT spectrum are more prone to emotional and behavioral problems, including addiction and suicide.  But even if such evidence didn’t exist, there are other reasons to be worried.

Although the family is the basis of society, the LGBT “family” may spell the end of society.  By their very nature, same-sex “marriages” do not tend toward reproduction.  They defeat what, from a Judeo-Christian view, is the main purpose of marriage—namely, to “be fruitful and multiply” (Gen. 1:28).  That also is the obvious biological purpose of sexual intercourse.  If you are interested in the continuation of the human species (and, admittedly, many people have no such interest), then putting LGBT “marriage” on a par with one-man, one-woman marriage is a form of societal suicide.

Just to be sure you’re not confused about the matter, the Bible sets down at the very beginning (page 2 of a 1300-page book) the God-ordained plan for human thriving—the part that says God created humans in two forms, male and female; and, a few verses later, the part that says, “therefore a man leaves his father and his mother and cleaves to his wife, and they become one flesh” (Gen 2: 24)

One wonders, then, why some bishops and cardinals have invested so much time and energy in advancing the LGBT project and why Pope Francis keeps promoting them to key positions. What do they get out of it?  Well, perhaps, they hope to get some justification for pushing their own permissive agendas.

You don’t have to be a psychologist to understand that much of the support for the homosexual agenda comes from heterosexuals who wish to justify their own right to break with the one-man-one-woman-until-death-do-us-part pattern.

In short, a move in the direction of LGBT is widely understood (even if only on the unconscious level) to be a move toward greater sexual permissiveness for all.  This seems to be the way the LGBT-friendly prelates view the matter.  Not only do they support greater permissiveness for the LGBT inclined, they support greater permissiveness in almost every area of family life, marriage, and sexuality. Moreover, it is naïve to suppose that prelates who are pro-LGBT are merely sympathetic to those who live LGBT life styles.  The evidence suggests that many of them are or were actively engaged in homosexual behavior. The more that they can convince others of the acceptability of peripheral sexual identities (e.g., transgenderism), the more that their own orientation will seem normal by comparison.  In any event, it seems strange that they do so much to support alternative family and marriage arrangements, and so little to support the one that the Church has always prescribed.

And Francis?  Well, as is now quite obvious, one of Francis’s main projects is the protection of the environment.  And, as the people who have his ear keep insisting, one of the greatest threats to the environment is all those billions of humans who keep getting born and who keep trampling through the sacred eco-system.  Maybe Francis has no conscious intention to depopulate the planet, but it’s strange that the kind of people he keeps promoting to influential positions support sexual agendas that, should they take hold, will inevitably lead to a sharp decrease in population.

It’s also strange that so many Vatican conferences—particularly those sponsored by the Pontifical Academy of Social Sciences—feature prominent pro-abortion and depopulation advocates as participants and speakers. It’s just one more example of Church leaders acting in ways that belie their supposed commitment to Church teachings.

Many Catholics have taken heart from the Congregation for the Doctrine of the Faith’s ban on the blessing of same-sex unions and the Pope’s approval of the ruling.  But judging from his record of appointments, it may be a little early to assume that Francis has had a genuine charge of heart on LGBT issues.  Francis has a habit of taking one step forward after he has taken too many steps backward. He is also adept at sidestepping; but the overall direction in which he is taking the Church is clear. It is a leftward direction, and, among other things, that means a more permissive attitude towards sexuality. The blessing of same-sex unions has been banned for now but, to paraphrase an old saying, “don’t count your blessings before they’re hatched.”