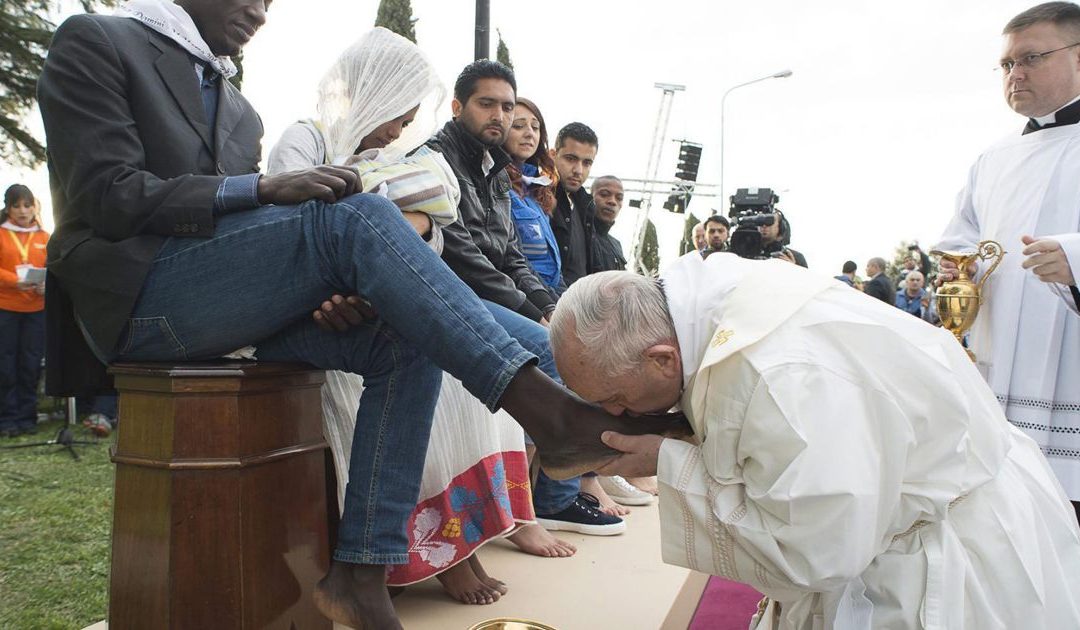 During Holy Thursday Mass, Pope Francis washed the feet of migrants, three of whom were Muslims. Most Catholics understood this as a gesture of humility and brotherhood. That is how the Catholic press reported it—and that, undoubtedly, was the Pope’s intention.

Many Muslims, however, may see it differently—not as a gesture of brotherhood, but as one of submission and surrender. The word “Islam” means “submission,” and submission is what Islam expects of other faiths. Muslims consider Islam to be the supreme religion. To the extent that it tolerates the “People of the Book” (Christians and Jews), Islam tolerates them on the condition that they acknowledge its supremacy.

Historically, the People of the Book were expected to assume the status of dhimmis—second-class citizens with limited rights. The origin of this attitude can be found in several verses in the Koran, particularly 9:29, which says that the “People of the Book” are to be fought “until they pay the jizya with willing submission, and feel themselves subdued.”

The conditions that govern the lives of dhimmis were further elaborated in the Pact of Omar (named after the second caliph, Omar bin al-Khattab). The two dozen or so stipulations include a prohibition on building new churches or repairing old ones, a prohibition on displaying crosses, and a demand that dhimmis give up their seats “to honor the Muslims.”

With the passage of time, the dhimmi requirements were expanded, but the general idea was to keep Christians in their place, and even humiliate them. Sometimes, when dhimmis paid the jizya, they were required to approach the tax official on all fours.

Unfortunately, the dhimmi laws are not a thing of the past. Churches are prohibited in Saudi Arabia, and Christian visitors to the Kingdom are not allowed to bring Bibles with them. In Pakistan and other Muslim countries, Christians are looked upon by many as inferior beings, fit only for menial jobs. In Iraq and Syria, the Islamic State has re-imposed the jizya tax, and Islamic State scholars cite the Koran and the Pact of Omar as justification for doing so.

When the Pope kneels before a Muslim, these are the thoughts that will come into the minds of many followers of Islam. For them, the Pope’s gesture will serve as confirmation of the age-old Islamic conception of Christianity as a second-rate religion. Although some Muslims may be moved by the Pope’s gesture and some may even be converted, it’s likely that a majority of Muslims will interpret it as a sign of weakness.

In assessing the impact of the novel foot-washing ceremony, the timing also needs to be taken into account. The Holy Thursday Mass came two days after the Brussels bombings, and at a time when Muslim persecution of Christians is escalating. If Christianity was anything other than a humiliated faith, Muslims would expect to see some kind of strong response or some gesture of resolve.

Islam claims to be the natural religion of mankind, and the natural response to aggression is resistance. As Osama bin Laden reminded us, “if a man sees a strong horse and a weak horse, he will by nature favor the strong horse.” Yet, in the face of worldwide attacks on Christians, Church leaders meekly call for more dialogue and indulge in “reaching-out” gestures.

These unfortunate interpretations of the foot-washing ceremony could have been avoided if Pope Francis had not sought to give it a multi-religious flavor. Apparently, he was hoping to make a statement about the Church’s inclusivity. But the statement may have backfired. That’s one of the dangers in politicizing the liturgy. Muslims who see the Pope’s gesture as one of submission before Islam are not going to be convinced of the wisdom of Christian charity, they are going to be convinced of the prudence of sticking with the strong-horse religion. They will be more, not less likely to throw in their lot with the militants. If the Catholic Church appears to be submitting to Islam, they will reason that the only safe course of action is to do the same.

In matters of liturgy it’s usually a good idea to stick as closely as possible to the original. Christ consecrated bread and wine at the Last Supper, not pizza and Kool-Aid—or whatever they were using during the experimental “kitchen table” liturgies of the sixties and seventies. Likewise, Christ washed the feet of the Twelve Apostles. He didn’t include Philistines or representatives of the Zoroastrian faith. He didn’t offer to wash the feet of Herod or Pilate as a gesture of outreach.

The foot washing was part of the preparation that the apostles needed in order to be worthy of going out into the world and spreading the gospel. The point of it was not so much to stress the humility of Christ, as to stress that the apostles should act likewise. They too were to act as servants. But servants of which master?

The twelve participants are not meant to be merely passive objects of the celebrant’s charity, they are also subjects who go out into the world and act out the roles assigned to them by their master. But much of this symbolism is lost when the participants are servants of another faith system. In that case they serve as little more than props. They provide the backdrop for the making of a statement.

So, the inclusion of non-Christians in the ceremony is problematic: it makes for a garbled symbolic syntax. And because it is so garbled, the takeaway can be entirely different from the one intended. As I suggested earlier, for many Muslims the gesture will suggest weakness and even capitulation in the face of danger. But it will also signal the same for many Christians, Jews, and agnostics—particularly those living in Europe. Instead of reminding them of Christ’s humility, the Pope’s gesture is more likely to remind them of the hated European elites who also humble themselves before Islam. It would be difficult to overstate the degree of contempt that many Europeans now feel for their leaders—leaders who have been more interested in making “statements” than in dealing with reality. They are hated most of all for having opened the floodgates to Muslim immigration—an “inclusive” gesture that threatens to bring ruination to much of the continent.

Pope Francis undoubtedly intends none of this. But by using a religious ceremony to make a statement about current events, he leaves himself wide open to misinterpretation. Next Holy Thursday, it might be a good idea for the pope to stick to tradition and wash the feet of twelve Catholics. It will save us all from a barque-load of confusion.

This article originally appeared in the March 31, 2016 edition of Crisis under the title, “The Problem with Multicultural Foot Washing.”