Defense, Diversity, and the China Threat 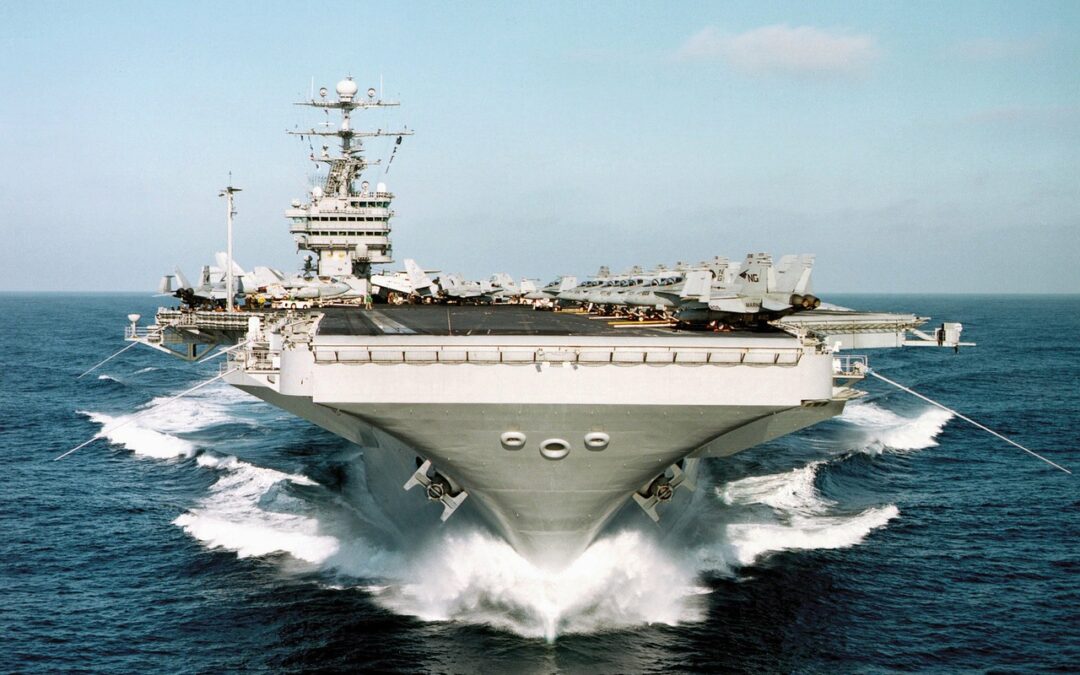 The FBI raid on Donald Trump’s estate has temporarily pushed the China threat out of the headlines.  But, of course, the threat is still there and so is the question of how to respond to it.

Teddy Roosevelt said that when dealing with hostile foreign powers one should “speak softly and carry a big stick.”  In other words, don’t provoke your enemies, but let them know that you possess sufficient fire power and personnel to handle any situation that may arise.

Roosevelt decidedly did not say, “shout loudly and carry a small twig.”  But there is a danger that some people, both in and out of government, may fall into the trap of thinking that tough talk by itself is a sufficient response.

Of course, I exaggerate when I use the term “a small twig.”  The U.S. still possesses a formidable military.  But there is evidence that, in comparison to China, it is no longer as formidable as it once was.

An article on missile defense systems in the March issue of National Defense outlines the problem.  It points out that in 2020, the Peoples Liberation Army (PLA) began fielding hypersonic weapon systems “with a high level of maneuverability” that makes it difficult for traditional missiles to defend against them.

Moreover, the PLA strategy “focuses on using offensive strikes to gain a military advantage at the beginning of a conflict.”  According to Timothy Walton, a fellow at the Hudson Institute’s Center for Defense Concepts and Technology, “they [the PLA] talk about conducting preventative attacks…and preemptive attacks of various kinds.”

What does that mean?  The answer, in two words, is “Pearl Harbor.” More precisely, it means simultaneous surprise attacks on multiple targets.

As Walton puts it, “On the whole, the current U.S. air-and-missile defense capabilities are relatively brittle.  It’s an architecture that I think could be relatively easily neutralized or paralyzed by an adversary like China.”

Hmm.  When the Chines first started making noises about Nancy Pelosi’s visit to Taiwan, much was made about the fact that a carrier group led by the USS Ronald Reagan was headed to the South China Sea.

“That’ll give ‘em second thoughts,” I said to myself.  Then I had second thoughts of my own.  How well would the USS Reagan be able to defend itself against the new hypersonic missiles?  I really didn’t know the answer, but a few days later in an interview with Tucker Carlson, Retired Colonel Douglas Macgregor said that “We are grossly overstretched” in the Pacific: “the Chinese are happy to sit there, let us travel thousands of miles to reach them and then sink us.”

But how about a modern aircraft carrier?

I did some quick research and found conflicting views.  Some sites said that modern carriers are practically unsinkable.  A 2019 Forbes article gave “Ten reasons a U.S Navy aircraft carrier is one of the safest places to be in a war.”  On the other hand, an article in The National Interest suggested that aircraft carriers are obsolete and outdated.  The National Defense article suggested the same thing.  Dr. Mark Lewis, executive director of the National Defense Industrial Association’s Emerging Technologies Institute is quoted as saying: “Imagine a hypersonic missile swarm that can sink an aircraft carrier—that’s really quite a capability.”

It’s not really unimaginable, of course, that an aircraft carrier can be sunk.  Aircraft carriers, battleships, and cruisers—American, British, German and Japanese—were sunk on a regular basis during World War II.  Sometimes a single plane carrying a torpedo could sink or disable a giant ship.  And let’s not forget that only four months ago, the guided missile cruiser Moskva, the flagship of the Russian Navy’s Black Sea fleet, was sunk by two Ukrainian anti-ship missiles.

The fact that warships are now equipped with defensive capabilities that didn’t exist during the Second World War is offset by the fact that our enemies are now equipped with offensive capabilities that far exceed those of that era.  Moreover, according to the National Defense piece, some of the counter-missile systems that we need “might not be available until 2030.”

In short, “big-stick” diplomacy doesn’t work if you don’t have the big stick.

But military power is not measured solely by advanced weaponry.  The quantity and quality of personnel is also essential.  Does the United States have enough troops to fight a war?  Are they well-trained and well-motivated?

The evidence is not reassuring.

About the same time that tensions were rising over Nancy Pelosi’s visit to Taiwan, reposts of a 2020 article by Major General Ed Thomas, the Commander of the Air Force’s Recruiting Service, began to pop up in the media.  The headline?  “Eighty-six percent of Air Force pilots are white men. Here’s why this needs to change.” Too many white men? Is that what our generals worry about? Like many other military top-brass, Major General Thomas seems to think that diversity wins wars.  That’s why he put “improving diversity” on “the top of my to-do-list.”

Otherwise, he notes, we “risk losing ground to Russia and China, both of which are integrating potential game-changing technologies like artificial intelligence and hypersonic flight.”  That’s curious.  I’m not sure about the Russian army, but the Chinese army has almost zero diversity.  But it does, as General Thomas admits, have a lot of “game-changing technologies.”  Exactly why a more diverse Air Force is the best response to those advanced technologies is never made clear.

Thomas admits that the Air Force is having recruitment problems, but it never seems to have occurred to him that the problem may not be too little diversity, but too much diversity.  Current U.S. military recruitment is all about diversity.  Recruitment advertising shamelessly caters to the LGBTQ crowd and it leaves potential recruits with the impression that those who have not marched in pride parades need not bother to apply.

For some indication of the type of diversity that our military now seeks, look no further than the type of entertainment it now offers the troops.  A few days before Chinese communist rhetoric about Nancy Pelosi’s Taiwan visit put the world on the edge of its seat, Joint Base Langley-Eustis (JBLE) hosted a drag queen show.  The drag performance was featured as a part of JBLE’s first “Diversity, Equity and Inclusion Summer Festival.” Despite its “hyper-sexualized” nature, the drag event was billed as “kid-friendly.”

According to an NBC news report, “every branch of the military is struggling to meet its fiscal year 2022 recruiting goals.”  One reason is that a growing number of young people don’t meet the eligibility requirements.  Because of obesity, medical issues, drug use or criminal records, 77 % of Americans aged 17 to 24 don’t qualify for service without a waiver.

What’s more disturbing is that only 9 % of those who are eligible to serve have any interest in doing so. The report offers several explanations for this lack of interest, but fails to mention the most likely one—namely increasing “wokeness” both in the military and in society at large.

Traditionally, the largest recruitment pool has been made up of young men and women who are religious, rural, conservative, patriotic, and from the South.  But many of them no longer want to be part of a military that embraces liberal and even leftist agendas and ideologies such as critical race theory and climate change.  They don’t want to hear that America is a racist society, and they don’t want to pretend that transgenderism is normal. It’s also likely that drag queen shows are not their favorite form of entertainment.

But as the military becomes less attractive to conservatives and Christians, it doesn’t necessarily become more attractive to liberals and leftists.  Christians and conservatives want to fight for higher values than those embraced by the modern military, but modern leftists aren’t sure that any values are worth fighting for.

Previous generations have fought for God, country, family, and liberty, but the woke generation has been taught to “see through” all such values.  Eventually, one’s own self becomes the highest value.  Once they come to realize that war may require the “ultimate sacrifice,” many, if not most of the woke will do their best to avoid the service.

One way or another, our society’s experiment with “woke” will only result in a diminished military.

Many in America still believe, as did Ronald Reagan, in peace through strength, but like an aging boxer, many of us tend to overestimate our strength and stamina.  The gap that is now developing between the U.S. military and the Chinese military seems likely to widen unless prompt action is taken.  Unfortunately, one of the characteristics of our woke military is a tendency to prefer fantasy to reality. The woke generals (who at this point are in the majority) seem more interested in social engineering than in military strategy.  They have been very slow to realize the magnitude of the threat we now face.

Our “woke” Congress also fails to understand the global power shift that is now underway.  Else, why was it preoccupied with passing a 750 billion dollar “Inflation Reduction Act” when the money could be better used to keep our “peace through strength” policy alive?  Likewise, why are we hiring 87 thousand armed IRS agents when the money could be better spent to recruit 87 thousand additional troops—to be drawn, preferably, from the ranks of patriotic conservative Christians in the rural South.

Unfortunately, the ruling party—the Democrats—are so enmeshed in their leftist thought world that they see conservative Christians as a greater threat than the communist Chinese.  The idea that “there are no enemies on the left” is not just a slogan, it’s a guiding principle for many in Washington.  And it’s a large part of the reason that we’ve failed to notice China’s growing arsenal of guided missiles—an arsenal that may someday be used to swarm and sink our ships.

There is an enemy on the left.  And its name is the Peoples Republic of China.

This article originally appeared in the August 18, 2022 edition of FrontPage.