Can America Ban Immigrants Who Reject Our Constitution for Sharia Law? 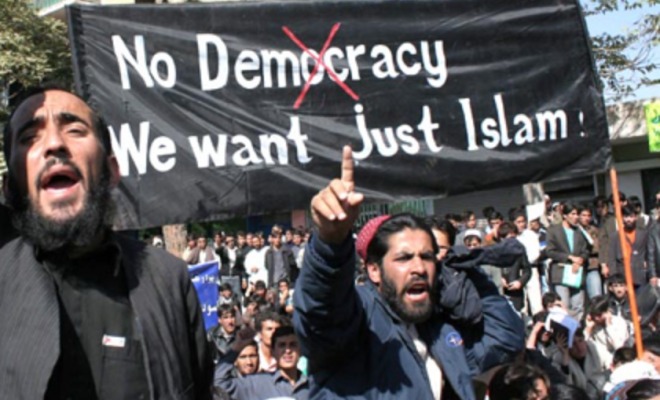 In their legitimate concerns over believers being forced to cater same-sex weddings or religious schools getting sued for upholding biblical morals, Christians may forget that there are and should be limits to religious freedom, especially when it comes to the question of whom to admit to our country. Remember that there is no Constitutional obligation to admit anyone at all, and that courts have found that the U.S. may turn away immigrants (for instance, Communists) who reject our Constitution.

Nothing brings the religious liberty question more sharply into focus than the spread of Islam into the West. Does religious liberty mean that a religion that advocates stoning for adulterers and death for apostates must be placed on an equal footing with non-violent religions? Or could religious liberty for large and growing numbers of Muslims endanger freedom for everyone else?

The Mormons Gave Up Polygamy

There are, in fact, a number of Supreme Court decisions that have put due limits on religious freedom. Perhaps the most notable case is Reynolds v. United States (1878), which upheld a federal law banning polygamy. The court ruled against the Mormon Church which had claimed a right on religious grounds to continue the practice of polygamy.  “To permit this,” wrote Chief Justice Morrison Waite,” would be to make the professed doctrine of religious belief superior to the law of the land.”

More than a century later, the ruling was reaffirmed in Employment Division v. Smith (1990).  The court upheld the firing of an Oregon public employee who’d illegally smoked peyote in a Native American Church ceremony.  Justice Antonin Scalia explained that granting a religious exemption for peyote use would undermine the law. It may seem surprising that Scalia sided with the majority, but that’s only if you assume that Christians must automatically favor a free pass for all behavior that’s labeled “religious.”

The First Church of Human Sacrifice

Typically, Constitutional scholars make a distinction between beliefs and practice, and most say that although beliefs are protected, religious practices may be restricted or prohibited. Thus, you can believe in the benefits of polygamy if you like, but you can’t take two wives. You may sincerely believe that virgin sacrifice contributes to social stability, but you may not practice it.

This distinction sounds good in theory, but there are problems with it. While the government shouldn’t try to control what you believe, it might legitimately take an interest in your attempts to spread your beliefs.  Suppose there were a First Church of Human Sacrifice (aka the Sacrificians) in the U.S. And suppose that although its members refrained from actual human sacrifice in deference to the Constitution, they extolled it in sermons, books, pamphlets and Sunday school classes. “We do not practice human sacrifice in this society, and we do not encourage it,” say the Sacrifician elders, “but it is, nevertheless, the best way to offer service to God.”

One may think that there’s no harm in allowing the Sacrificians to praise the beauty of human sacrifice, since no one in his right mind would want to join such a cult. But suppose, contrary to expectations, that the elders manage to present human sacrifice in such an appealing way that many are drawn to the religion. As a result, the First Church of Human Sacrifice grows rapidly, and soon Human Sacrifice temples are popping up all over the landscape.

With numbers comes respectability. Pretty soon, the media begin to run human interest stories about the human face of Sacrificians, and major denominations declare their solidarity with them. After a while, the Sacrificians get involved in politics, and end up as judges, police commissioners, mayors and legislators. As time goes by, it becomes increasingly difficult to resist the full Sacrifician agenda — especially when the elders assure the authorities that, for the time being, only volunteers, the terminally ill and the mentally deficient will be sacrificed.

In short, it might not be a good idea to let millions of Sacrificians move into our country. By the same token, it might not be wise to let sharia law take root in our culture. That’s because the full application of sharia does, in effect, call for human sacrifice. All sharia law books agree that adulterers may be stoned to death, that apostates must be killed, and that blasphemers should be jailed or executed. Moreover, non-Muslims can be killed for a variety of reasons.

Needless to say, sharia law is patently unconstitutional. But for a strict Muslim, sharia supersedes the Constitution. As the influential scholar Yusuf al-Qaradawi, puts it, “the Sharia is for all time to come, equally valid under all circumstances.”  Why?  Because sharia law is God’s law.  Man-made laws — such as the Constitution — are nullified if they contradict sharia.

Which brings us to President Trump’s recent executive order on immigration and refugees.  One section is particularly significant:

In order to protect Americans, the United States must ensure that those admitted to this country do not bear hostile attitudes toward it and its founding principles.  The United States cannot, and should not, admit those who do not support the Constitution, or those who would place violent ideologies over American law.

The ban itself is limited to a few months and to only seven countries, but the principle has wide application. It means that any Muslim who puts sharia above American law can be barred from entry to the U.S. But according to al-Qaradawi and other Muslim scholars, putting sharia first is what pious Muslims must do.

Because of sharia’s inherent conflict with the Constitution, it would be unwise to let Islam get a foothold in the U.S. It might be a different story if American Muslims were able to practice an American brand of Islam stripped of sharia, but that, in the long run, is unlikely. The political/legal side of Islam is inextricably bound up with the religious side. Can you be a good Muslim if you ignore Allah’s law?  Most Muslim scholars and jurists would say no.

It might be objected that we already have laws on the books that prohibit the uglier aspects of sharia law such as wife-beating, amputations for theft and the like. Therefore, it can be argued, there’s no need to keep out adherents of sharia: Muslims will simply follow those tenets of sharia that are not in conflict with American law, and ignore those that are.

Once again, it’s not so simple. Europe also has laws against polygamy, child marriage, spousal abuse and rape, but as I have noted elsewhere, the enforcement of those laws has begun to erode due to the pressures created by a growing Muslim population.

Sharia is the “Sexy” Aspect of Islam

Sharia laws and the sense of supremacy that goes along with it are among the main attractions of Islam — especially for the young. The sudden resurgence of Islam following the Iranian Revolution corresponded with a re-emphasis on sharia and jihad. That’s because Islam minus sharia and jihad has very little to offer. Islam was dying a slow death during the Colonial period and the era of the secular strongmen that followed, precisely because the ruling authorities made sure that the practice of Islam was largely confined to acts of prayer and piety.

Once the genie of jihad was released from the bottle, however, Islam took off. When young Muslim men discovered that Islam was not only about praying in mosques, but also about slaying or subjugating God’s enemies and thereby meriting the reward of virgins in paradise, they began to pay attention.

A Religious Duty to Kill the Infidel

How else do you explain the religious fervor with which jihadists speak of their exploits? A captured ISIS soldier told a journalist that he felt joyous because “I was killing infidels.” After twenty-eight Christians were killed in a bombing attack on St. Peter’s Cathedral in Cairo, social media were filled with comments such as “God bless the person who did this blessed act.” Before murdering an Israeli policewoman, Ahmad Zakarneh sent a text message to his parents urging them not to grieve, because “I yearned for a saint’s death … I am a martyr by Allah’s assistance. Rejoice.” In the West Bank, streets, squares, parks and schools are named in honor of “martyrs” — whose victims often include women and children.

Islamic beliefs have predictable consequences. From kindergarten on up, Palestinian children are taught to hate Jews and to aspire to martyrdom. The Egyptian Ministry of Education incites hatred for Christian Copts. In Iran, children as young as eight are recruited into paramilitary groups and trained to hate the U.S. and Israel. Like the hypothetical Sacrificians, not every Palestinian, Egyptian, or Iranian wants to kill, but the ideal of serving Allah through martyrdom suffuses their culture. In America, children are introduced to the warrior code through video games. But while American youth only play at being warriors, Muslim youth are given incentives to actually live out Islam’s warrior/martyr code.

The question is, do we want that sort of culture to take root and grow in our society? When you think about it, the notion of extreme vetting of Muslim immigrants and refugees makes a lot of sense. As the recent executive order cautions, “The United States cannot, and should not, admit those who do not support the Constitution, or those who would place violent ideologies over American law.”

This article originally appeared in the February 6, 2017 edition of The Stream.